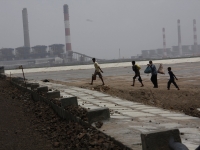 An Indian fishing community is suing the World Bank in Washington DC over the environmental damage caused by a coal powered plant owned by Tata Power, the largest electricity company in India. The 4,150 megawatt plant is located in the port city of Mundra in Gujarat state.

Tata Power built the $4.14 billion coal plant with the help of a $450 million loan from the International Finance Corporation (IFC), the private sector arm of the World Bank, that was granted in April 2008. The plant began producing power in March 2012 and was fully operational a year later.

The company claims that the plant is "arguably the most energy-efficient, coal-based thermal power plant in the country."  But the Wagher, a Muslim minority community that lives in the shadow of Tata Mundra, says that the ash generated by the plant has created significant pollution problems and devastated the local fishing industry, their primary means of livelihood.

"People have respiratory problems now. The elderly are the worst affected," said Sidik Kasam Jam, a local fisherman who is suing the World Bank, told Earth Rights International, a Washington non profit that helped bring the lawsuit. "You can see the dust on the fish we lay out to dry."

"In the morning and at night, you can see steam coming off the outfall channel. It never  feels like winter anymore, it is always warm now," said Budha Ismail Jam, another of the plaintiffs. "The fish catch has been declining since 2011. The last three years have been particularly bad. In one day, I used to catch three times as much fish as I have caught in the last 7 days."

In June 2011, the Machimar Adhikar Sangharsh Sangathan (Association for the Struggle for Fisherworkers' Rights) filed a complaint against the IFC with the Compliance Advisor Ombudsman (CAO).

In an audit report issued in August 2013, the CAO agreed that the Wagher "were not adequately considered" and that a "lack of effective consultation with fishing communities early in the project cycle process resulted in missed opportunities to assess, avoid and reduce adverse potential adverse impacts of the project."

The World Bank says that the plant is providing power to 16 million rural and urban-based domestic consumers in the western states of Gujarat and Maharashtra as well as in the northern states of Haryana, Punjab, and Rajasthan.

But Rick Herz, Earth Rights litigation coordinator, says that is no excuse for destroying the livelihood of the local community. "While the IFC purports to support this project in the name of poverty reduction and development, its impacts fall hardest on the poorest and most vulnerable communities," Herz said in a press statement. "The IFC failed on all counts with the Tata Mundra project."

The IFC claims that it is looking into the matters raised. "The company has commissioned model confirmation studies that will provide insights into any impacts on the marine environment and livelihoods of the fishing communities," the IFC says in a "frequently asked questions" section of the World Bank's website.

Meanwhile the Tata Mundra plant is not doing well financially. In February 1015, ICICI Securities financial analysts estimated that the project had lost Rs 3,817 crores in the last three years ($636 million) because of the increase in the costs of coal imported from Indonesia.

In 2013, the company asked the state governments to pay an extra 20 percent for electricity from Tata Mundra. Although the Indian Central Electricity Regulatory Commission initially approved an increase from Rs 2.26 per megawatt to Rs 2.73 ($0.0376 to $0.0455), the Supreme Court struck down the rate hike in August 2014.

"You have been awarded the contract because you were the lowest," Justice Jagdish Singh Khehar told Tata Power. "Once you agree to it how can you ask for increase in prices now. It's a contract which you had agreed to. Now you can't claim that its a loss."