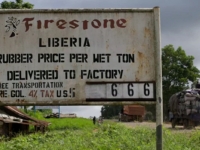 Firestone, a U.S. tire company, paid out millions of dollars to Charles Taylor, a Liberian warlord in the 1990s, despite knowing about his brutal human rights record, according to documents uncovered by ProPublica, an investigative journalism website. Taylor is now serving a 50 year prison sentence for war crimes.

"Do I think they (Firestone) have blood on their hands? Yes," Gerald Rose, the second in command at the U.S. embassy in Liberia at the time, told ProPublica. "I would not have made the decisions they made. I believe they facilitated a warlord in his insurrection and in the atrocities that he created."

Liberia came into existence in the 19th century, founded by former U.S. slaves who were allowed to return to Africa with financial support from the U.S. Congress. Over time, the country came to resemble the plantations on which the slaves had previously worked on in the U.S. when Firestone set up shop in the 1920s and paid for the right to farm rubber on one million acres, one tenth of the fertile land in the country. Firestone quickly became Liberia's biggest exporter, biggest tax payer and biggest employer.

Firestone executives shut down the plantation and fled the country with the help of military escorts provided by the U.S. embassy. But over the next few months, the company decided to return to the country, so Firestone officials worked with U.S. Ambassador Peter Jon de Vos to meet with Taylor.

John Schremp, a top Firestone executive at the time, helped negotiate a deal with Taylor. "We agreed that Firestone would be given permission to restart the plantation, feed the employees and put them back to work," Schremp wrote, to ensure "the common goal of a better future for Liberia and its people." On December 17, 1991, Firestone's board approved of the deal and an agreement was signed in Liberia one month later.

In 1992, the company paid out over $2.3 million in cash, checks and food to Taylor, according to court documents from a lawsuit in Ohio. ProPublica reports that Firestone management turned a blind eye to the fact that Taylor was using the plantation landing strip to bring in planeloads of weapons.

"We then made it very clear to the Firestone plantation company that they could no longer be permitted to exercise allegiance to the government in Monrovia," Taylor testified later. "It (the plantation) became at that particular time our most significant principal source of foreign exchange."

Weapons began to arrive on mysterious flights which were then stashed inside the plantation. "When the plane come, you will see vehicles coming from there covered with tarpaulin, and it seem to be weapons, you know," said Daniel Roberts, the secretary of the plantation manager, told ProPublica. "The boys that were living with us in the camp will say, 'Our weapon will come.'"

Days after the U.S. embassy paid an official visit to the Firestone plantation, Taylor launched Operation Octopus, in an attempt to seize Monrovia, the capital of the country. "At around 3 a.m. on October 15, Taylor unleashed his hell on Monrovia. Howitzer cannons and 81 mm mortars set up in outlying suburbs hurled metal into the sleeping city - a narrow peninsula bordered by mangrove swamps, mudflats, creeks and the Atlantic Ocean," write T. Christian Miller and Jonathon Jones in a 20,000 word article on ProPublica's website that accompanied a 90 minute film about their investigation.

Taylor would eventually become president of Liberia, serving from 1997 to 2003. He fled the country soon after resigning and was eventually captured and put on trial in the International Criminal Court in the Hague. In 2012, Taylor was found guilty of "aiding and abetting" crimes against humanity including murder, rape, sexual slavery, enforced amputations and pillage, and sentenced to 50 years in jail, which he is now serving in the UK.

To this day, Firestone continues to deny their ties to the violence of the 1990s.

"Firestone had no role in the rise of Charles Taylor. It had no role in his ability to hold power in Liberia," Firestone told ProPublica. "Does Firestone believe it did the right thing? Yes. Do we, along with former U.S. presidents, the U.S. State Department, the United Nations and many leaders around the world who worked with Charles Taylor regret the war criminal he became? Yes."