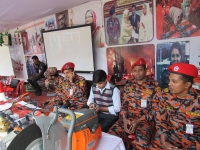 At least 52 workers have died after a fire broke out at the Hashem Foods factory in Narayanganj, some 16 kilometers southeast of Dhaka, the capital of Bangladesh. Many of victims were teenagers employed in violation of labor laws, who died because the gates to their workplace were locked.

The Hashem factory belonged to Sajeeb Corporation, one of Bangladesh's biggest conglomerates. It produced chanachur, a popular fried snack, fruit drinks like Shezan juice, and Nocilla, a hazelnut and chocolate spread similar to Nutella.

Laizu Begum told the BBC that her 11-year-old nephew worked at the factory. “We realised, after seeing how big the fire was, that he is probably dead," Begum said. "We heard the door of the floor where my nephew worked was padlocked.”

One survivor was 13-year-old Halima Akhter from Palgaon village in Netrokona district, who jumped from the second floor of the building when it caught fire. Asked why her daughter was working at such a young age, Shahana Akhter, her mother told BDNEWS24: "The poor know no age."  (The International Labor Organization estimates that 1.2 million children work in dangerous occupations in Bangladesh.)

Firefighters who fought the blaze say that the death count was exacerbated by multiple factors: a pipeline system that carried edible oil; the large quantity of paper and plastic raw materials stored on the premises; and not least, the fact that the gates on the third floor were locked making it impossible for workers to flee. At least 25 perished on that floor.

Police have arrested Mohammed Abul Hashem, the patriarch of the family that owned the factory, together with four of his sons: Hasib, Tanjim Ibrahim, Tarek Ibrahim, and Tawsib Ibrahim.

"Am I responsible for this? It is not like I went and set the fire. Neither did any manager of mine do so," Hashem told the Daily Star newspaper, days before his arrest. "The fire may have been a result of workers' carelessness. Maybe some worker did not put out his cigarette before throwing it.”

In addition, local officials told the Dhaka Tribune that the owners of the Hashem factory, which was built in 1996, never applied for any permits, nor submitted any design paperwork. Previous inspections revealed that the factory did not even have a single fire extinguisher.

Hashem Foods was not unusual: many Bangladeshi factories are ill-equipped to deal with accidents or disasters. Narayanganj, which hosts some 200 factories, saw 127 fires in 2020 alone.

“We found that more than 90 percent of the factories do not have proper firefighting equipment in Narayanganj,” Abdullah Al Arefin, the deputy director of the Fire Service and Civil Defence unit in Narayanganj district, told the Dhaka Tribune. “The rest of the factories have firefighting systems, but they do not meet safety standards. The workers cannot fight flames at all like this.”

Ironically, the factory in Naraynganj had been visited by the Department of Inspection for Factories and Establishments, just a month before the fire. However, the Daily Star newspaper reports that the inspectors merely looked into COVID-19 measures on that occasion, and failed to look into fire safety or child labor use.

“The combination of child labor and workers locked into an unsafe factory has led to a particularly heartbreaking and distressing result," Valter Sanches, general secretary of the IndustriALL Global Union, said in a press release. "This horrific case of industrial homicide brings home to us the barbaric conditions and complete lack of safety in some Bangladeshi factories."

Sanches noted that the Bangladeshi garment sector has improved its safety record in the last decade thanks to the Accord on Fire and Building Safety that was created in 2013. It is an independent, legally binding agreement between 120 fashion brands sourcing from Bangladesh and trade unions to work towards a safe garment and textile industry, and is managed by the Ready-Made Garments Sustainability Council. (The parties to the Accord are currently renegotiating the terms, which are time limited.)

The Bangladeshi government has announced an investigation into the disaster and has said it will strengthen safety measures in the future, but this will comes as cold comfort to the families of the victims.

Factory owners are liable to pay families of workers killed in industrial disasters just 200,000 taka ($2,360) which is equal to 40 months of wages for many of the Hashem workers. However, few employers pay the amount which is stipulated in the Bangladesh Labour Act of 2006, say experts.

"Most corporations being sued for compensation under the labour law, instruct their team of lawyers to prolong the litigation period as much as possible," writes Taqbir Huda, a researcher at Bangladesh Legal Aid and Services Trust (BLAST) who coordinates a project called Justice for All Now. "Family members of workers killed in industrial establishments who dare to exercise their right to seek compensation against an industrial employer in labour courts become tired out to the point where they feel compelled to abandon the case."

The death toll in Narayanganj ranks as the one of the worst industrial disasters in South Asia in recent decades. By far the most deadly was the leak of methyl isocyanate gas at the Union Carbide insecticide factory in Bhopal, India, in December 1984, that killed at least 3,800 on the day and some 15,000 over the next few years, according to official government figures.