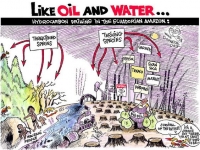 Manuela Omari Ima, a Waorani woman from the Ecuadorian Amazon, was

rainforest at the intersection of the Andes, the Amazon and the

Equator. That intersection is also the heart of a struggle between two

plans: one for oil exploration and another that would permanently

protect one of the most biologically diverse regions of the planet.


The United Nations Educational, Scientific and Cultural Organization (UNESCO) declared Yasuni a biosphere reserve in 1989, after biologists found that a mere 2.5 acres of this forest contained as many tree species as in the United States and Canada combined. It is also home to jaguars, woolly and

spider monkeys, and harpy eagles -- the most powerful bird of prey in the

world. Some of the species in Yasuni, however, live on the brink of

extinction: including more than 20 globally threatened mammal species such as

the white-bellied spider monkey and the rare golden-mantled tamarin.


The animals, birds and plants are not the only species whose numbers

are shrinking rapidly. At the time of her birth, Omari Ima, who is now in her mid-thirties and is chair of Amwae, the Waorani women's organization, says that there were some 16,000 Waorani. "Today, there are no more than about a thousand of us left," says
Omari Ima. "It is, simply, a struggle for survival."


One of the key reasons for this, she says, was the arrival of multinational oil companies in the latter part of the 20th century, which represented her tribe's first and forced contact with industrial civilization. Soon displaced to a controlled existence in a reservation, Omari Ima's family and tribe was divided, just as the rainforest itself soon became divided by roads and oil fields.


A new plan, yet to be funded, could bring a halt to this exploration,

but some damage has already been done.

Yasuni sprawls over two countries -- Ecuador and Peru -- both of whom

see the Amazon as a potentially lucrative source of income. In August

the Ecuadorian government granted an environmental license for

Petrobras, the Brazilian state-owned corporation, to drill for oil in

(ITT) oilfields, ITT is believed to hold up to a billion barrels of

oil, almost a quarter of the country's total known reserves. At

today's oil prices, this could mean revenue of over $700 million a

acquired by U.S.-based Barrett Resources and Repsol of Spain.)

Armed with these new contracts from Quito, Ecuador's capital, the

companies have attempted to win over the people of the forest. Alicia

Cahuiya, another Waorani woman who lives in the town of Pujo, says the

companies offered the indigenous villagers items such as soccer


"The companies have often bought villagers off with small gifts,

when people have become sick from contamination caused by the oil

extraction and begun to protest, the military have rushed in to

With the tacit permission of the villagers, Petrobras started to

Yasuni, such as the construction of a harbor along the edge of the Napo

River in March of 2005. They hired a Swedish construction company

named Skanska, which has numerous similar contracts in the region such

as in Brazil and Bolivia, to do the work. Skanska currently works in Ecuador with Tecpecuador and Petrobras in Block 18, and in Bolivia it continues to do controversial work with Repsol.


Local authorities soon started to complain about Skanska's work in the area. Environmental inspector Marcos BaÃ±os, head of the

environmental authority for the Amazonian province of Orellana, says

that Skanska behaved in a suspicious manner. BaÃ±os says that company

representatives have visited the authority to offer to perform


And Raul Vega, an official in the provincial environmental office in

the oil town of Coca, says that the company refused to cooperate with

them. "The Skanska boss Oswaldo Contreras was the first Skanska

person we contacted," Vega explains, "and he refused to give

us the information we required. If they had only shown us they'd done

an environmental study, we would have given them a permit, but it was

not until a subsequent occasion that Skanska submitted any information. That information, however, turned out to be false. The

company claimed it had conducted an environmental study, which was a


The construction was halted after a few months. Petrobras' permit

was revoked and the company was asked to conduct an environmental

for the initial exploration work conducted in 2005.

oil exploration in the Amazon, says that they conducted an

on-the-ground inspection in Chiru Isla, a Quichua indigenous village inside Yasuni and along the Napo river. The inspection revealed that five families out of 20 experienced poisoning due to dumped diesel and

oil in the watercourse from where the villagers got their drinking

water. All the members of these families became seriously ill,

suffering from headaches and vomiting.


The investigation by AcciÃ³n EcolÃ³gica also revealed that waste from

latrines on Skanska's construction site had been dumped in the

surrounding water courses. This is in violation of Ecuador's health laws,

and causes a major hazard for the local population.

The Chiru Isla villagers, who fear repression and therefore prefer to

and climbing at the construction site without protection -- but never

paid them. Skanska is also accused of having purchased food supplies

like bananas and yucca in the villages, but failing to pay.


The company disagrees. One of Skanska's regional managers in the

who has worked in the industry for many decades. He dismisses the

complaints: "People here in the bush should be grateful to

industry instead of just complaining and making unreasonable demands,"

Diaz also says that the indigenous people are a threat to Skanska.

"People here are slightly backward. You never know when the

barbarians are going to start shooting arrows from the bushes. At

Skanska, we also have a strict security culture. Personally, I never

go unarmed in the bush."


The Skanska engineeers pay for armed private security guards, but the

special security council set up by the government of Ecuador in

(Special Group on Oil Security). GESPETRO is charged with coordinating

security for the companies involved with oil extraction such as Petrobras.


The contracts include stipulations that the oil companies are to

and emergency medical care in exchange for protection. Similarly, the

companies are obligated under the contracts to inform the Napo

military base of community projects and programs that the company

provides to the civilian population.


Alicia Cahuiya says that effectively the land belonging to her people

military:  "Every step we take is watched, and if we voice a

protest, Repsol turns the military on us," she says. "If we

do not comply, they threaten or beat us. There have even been cases where the military have killed Waorani people and thrown the bodies in


Attorney Bolivar Beltran, from FundaciÃ³n Lianas, says that the

contract violates Chapter V of Ecuador's constitution, as well as the

UN Convention on the Rights of Indigenous and Tribal People. Both assure indigenous peoples a set of cultural and self-determination rights, such as the right to be part of all decision-making on issues concerning their lands.

Pablo Fajardo, a lawyer for the Ecuadorian network Frente de

"The population is being exposed to serious health hazards and

illness related to oil spills and deliberate waste dumping while they

often live in fear of the companies, whose power is expressed through

threats and violence," he says. "By using armed private forces,  the companies try to control and stifle local resistance at any price.

This is what it's like in the entire region, and all companies working

with oil are forced to deal with this reality."


Back in Sweden, Noel Morrin, Skanska's sustainability manager at the company headquarters in Stockholm, claims that the company is not breaking laws or violating its own ethical code of conduct.


But some Skanska officials say that they are concerned about the

allegations in Ecuador. Peter Gimbe, the senior vice president for

communications in Stockholm, says that headquarters has little insight

into local conditions and that they are investigating the complaints.

Today the future of the ITT fields remain uncertain. The new

government of Rafael Correa initially considered the possibility of

creating a consortium with Ecuadorean state-owned oil companies to


In May 2007 Correa put forward an innovative idea: his government

would refrain from exploiting Yasuni in exchange for receiving at

least $350 million annually from the international community. The idea

was promoted heavily by the government, with vice-president Lenin Moreno Garces staging an event during the Live Earth concert last

year. TV cameras broadcast him joining nearly 100 people to spell out the words "Live Yasuni" from a forest clearing.


Organizations like the Wallace Global Fund have committed $100,000 to

the initiative. A number of other groups including AcciÃ³n

have put their weight behind it as well, but the plan has yet to get firm

commitments for the full sum of money.


Editor's Note: CorpWatch is a recipient of funding from the Wallace

Global Fund. This article was commissioned without any input from the