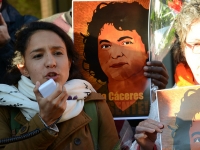 Two employees of Desarrollos Energéticos SA (DESA) have been arrested and charged with the murder of Berta Cáceres, an activist who was fighting the Agua Zarca dam on the territory of the indigenous Lenca people in Honduras. DESA was awarded a permit to build the 22 megawatt dam in 2011.

The Agua Zarca dam on the Gualcarque River was initially supported with funding from the World Bank and Sinohydro of China. Construction began in 2012 and access to the river was cut off soon after, heavily impacting the local community who considered the river sacred, in addition to depending on it for food and water.

In April 2013, the Council of Indigenous and Popular Organizations of Honduras (COPINH), led by its founder Berta Cáceres, organized a successful road blockade of the dam area that brought construction to a halt.

"That project has been imposed with militarization, with very wicked maneuvers on the part of the company," Cáceres told Jacobin magazine. "They have threatened me with death. I have received threats by cell phone. Sexual harassment from the security guards of these companies. I have received threats against my family, against my daughters, against my son. I have been threatened with criminal charges. Accusations. Everything from the illegal possession of arms to coercion, usurpation, and continued damages."

She reported 33 death threats against her including from the two DESA employees who were just arrested. The threat to her life was considered grave enough for her to be listed by the Inter-American Commission on Human Rights as needing special protection.

In late February of this year, Cáceres held a press conference to denounce those who wanted to kill her. A week later she was murdered on March 3 in her house in La Esperanza.

Two months after her death, Honduran police released a public statement on Facebook announcing that Sergio Rodriguez, a DESA engineer, and Douglas Geovanny Bustillo, the former head of DESA's private security team, were identified as a result of an in-depth investigation dubbed 'Operation Jaguar.' Two other men - Mariano Chavez and Edilson Duarte Meza - were also arrested.

Despite the arrests, activists have not been thrilled with the way that Honduras has pursued this investigation. "So far the Honduran-led investigation has been a tragedy of errors - with false accusations, suspected cover-ups, and a brazen conflict of interest at the public prosecutor's office," Billy Kyte, a senior campaigner at Global Witness, said in a press statement. "The people who ordered Berta Cáceres' murder must be held to account, not just the triggermen."

Global Witness, a human rights organization based in London, simultaneously released a set of court documents from 2014 to demonstrate how DESA had intimidated Cáceres and her organization.

In the lawsuit, DESA accused Cáceres and COPINH of 'usurpation, coercion and continued damage.' "The company was harmed by the protests, which were not peaceful but instead violent," Juan Sanchez Cantillano, a former lawyer for DESA told the Associated Press. "The protesters invaded the terrain of DESA and burned the machinery and the offices. ... They destroyed everything."

Local activists also say that the Honduran government also has a lot to answer for. "I want it to be absolutely clear. The government of Juan Orlando Hernández is responsible for the death of Berta Cáceres," Padre Melo, a local Jesuit priest and radio journalist told the New Yorker magazine.

Her daughter agrees. "It is the government who awarded the dam commission and the government who sent military and police to work with Desa's private security guards, who threatened my mother," Laura Cáceres, tha daughter of Berta Cáceres told the Guardian. "If it wasn't for our struggle and the international pressure for justice, my mother's murder would already be extinct."

Kyte says that the only way to ensure that the truth could be uncovered would be for the Honduran government to accept the offer by the Inter-American Commission on Human Rights to conduct an independent investigation.