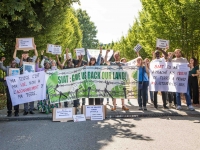 A delegation of forest activists from Côte d’Ivoire, Ghana and Nigeria traveled to Zaventem, Belgium, to stage a protest in June outside the headquarters of SIAT (Societe d'Investissement pour l'Agriculture Tropicale or Investment Company for Tropical Agriculture) over landgrabbing in their communities. “Give us back our land,” they chanted.

Others held up signs that read: “We don’t wanna die for your rubber,” and “Stop Injustices in African Territories.” The delegation members handed over a letter to company officials with a request that it be given to the company CEO.

SIAT operates 46,100 hectares of oil palm plantations and 24,000 hectares of rubber plantations in the three countries. It is one of the five biggest operators of palm oil plantations in Africa. The company sells its palm oil to companies like Nestlé and Unilever, while the rubber is sold to companies like Goodyear and Michelin, according to research conducted by CIDSE (Coopération Internationale pour le Développement et la Solidarité), an umbrella organization for Catholic development agencies from Europe and North America.

Members of the delegation to Belgium included Nahounou Daleba of Jeunes Volontaires pour l’Environnement (JVE, or Young Volunteers for the Environment) in Côte d’Ivoire; Sinan Ouattara Issifou, a representative of the local communities of Famienkro, Côte d’Ivoire; Wisdom Koffi Adjawlo, executive director of the association Youth Volunteers for the Environment in Ghana; Gladys Omorefe Osaghae, secretary of a women’s group from the Obaretin community in Nigeria; and Rita Uwaka, a Nigerian representative of the environmental organization Friends of the Earth.

Rubbed Out, a new Global Witness report published the week before the protest, notes that industrial rubber exports are the biggest threat to central and western Africa’s tropical forests. (Rubber brings in 12 times more income than palm oil in the region.) Most of the funding for these plantations comes from just a few banks: BNP Paribas in France, Barclays in the UK, Deutsche Bank in Germany, and Rabobank in Belgium.

“It’s a paradox. People in Europe driving fancy cars have no idea that the rubber in their tires is grown in a place where the local population is almost destitute,” Daleba told Global Witness.

"Our communities therefore gain nothing from the presence of SIAT," Uwaka told Mondiaal Nieuws, a Belgian alternative news quarterly. “They take away our land, our forests and make our way of life impossible. At the same time, all profits are private.”

“If you look at the global demand for land in Africa, half of it comes from rubber and palm oil,” Samuel Nguiffo, director of the Center for Environment and Development in Yaoundé,  Cameroon, told Global Witness. “The land that is being used by companies to plant rubber trees is land that is being lost by communities.”

“Several cases on the African continent show that companies sometimes only selectively consult local leaders for admission and then use them to impose their will on the rest of the population. Sometimes it is about financial and material compensation that only favors certain people,” Tomaso Ferrando, a law professor at the University of Antwerp and the former legal advisor to the United Nations Special Rapporteur on the Right to Food, told Mondiaal Nieuws.

For example Compagnie Hévéicole de Prikro, a SIAT subsidiary, acquired land for rubber plantations in the villages of Famienkro, Koffessou-Groumania and Timbo, in the Iffou region of Côte d’Ivoire. The villagers sued in local courts in 'M'Bahiakro in 2013 but lost the case in 2016. Two villagers were killed when the local security forces opened fire at a protest in 2015, and another died in detention after being arrested.

SIAT also owns Ghana Oil Palm Plantation, which operates 7,800 hectares of industrial oil palm plantations in Kwae and Okumaning estates in the eastern Ghana. In Nigeria, SIAT operates industrial oil palm plantations in Bendel state and Rivers State, which were created by Pierre Vandebeeck, the founder of SIAT, who worked as a contractor for a World Bank project in the region, according to research conducted by GRAIN, a land rights organization based in Spain.

SIAT confirmed that the letter from the protest delegation in June was handed to Jan van Eykeren, the company CEO.

“We are going to look at everything carefully and then respond appropriately,” van Eykeren told Belga News Agency. "The land was acquired at the request of the various governments, at a time when state-owned companies had to privatise. We do not go looking for extra land, the governments ask us.”

Meanwhile, the European Union has also claims that it plans to address this matter. “European voters and consumers … no longer want to buy products that are responsible for deforestation or forest degradation,” Ursula von Leyen, president of the European Commission, told delegates to the climate change convention negotiations in Glasgow last December. “This is why we will soon propose a regulation to tackle EU-driven global deforestation.

Unfortunately, rubber is not covered by this proposed regulation, according to Global Witness, as a result of “concerted” lobbying by the tire industry.