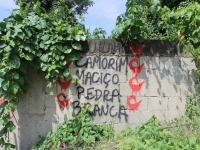 Media attending the Olympic Games in Rio de Janeiro are being housed in apartments constructed by workers "in conditions analogous to slavery" by Cyrela, the largest real estate company in Brazil. The local community has also complained that the construction has ruined the water supply and destroyed forested areas.

The Barra Media Village 3 was constructed on Camorim, a 19th century 'quilombo' or a community of escaped slaves. Most quilombos were officially recognized and allowed to acquire title to their land in 1988 but Camorim, whose descendants still live on the land, have never been officially recognized despite a decade of effort.

Cyrela bought the land in 2013 and began construction despite community opposition. "One Sunday morning a chainsaw came and devastated everything including century-old trees," Adilson Almeida, community leader of the Quilombo do Camorim, told Rio Olympics Neighborhood Watch. "I regard the ground as sacred because it is where my ancestors were buried. Any land where you find artifacts, traces of human bones, or even prehistoric animals comes to be a sacred site and should be protected by law."

Brazilian media also allege that Cyrela won the contract for the construction because of their close ties to Eduardo Paes, the mayor of Rio, whose campaign the company helped fund. Cyrela denied any favoritism. "The acquisition of the property by Cyrela took place in a regular and lawful manner," Cyrela said in a press statement to the Guardian newspaper.

The construction company was also accused of mistreating its workers. In late November last year, the government sent in a special mobile team to rescue 11 workers who were employed by two sub-contractors - TNO Engenharia em Revestimentos and AGL Construtora. The workers, who hailed from Minas Gerais, EspÃ­rito Santo and Pernambuco, were being housed in a two bedroom house with mold, rats and a blocked toilet, according to a BBC report.

"I had no idea that the boss was supposed to provide cleaning supplies and to maintain it," Luiz Paulo de Souza, a bricklayer assistant who worked on the site, told the BBC after he quit. "It still amazes me."

Meanwhile the original inhabitants say that the new construction has severely impacted their lives. "Before there were never water shortages here. After they started construction, they diverted the water that came here, and redirected it to [the site of the media village]," HÃ©rick Santos, a local gardener, told Rio Olympics Neighborhood Watch. "We have no running water and have to turn on the water pumps in the early hours of the morning because during the day there's no water."

While most media have stuck to reporting on the Olympic gold medal tallies and beaches, a few have taken the opportunity to report on the stark contrast between the official Games and the lives of local Rio residents.

"Just over there, the dolphin-backed Michael Phelps glides through another heat. Over here, a lone ramshackle favela house practically leans against the Olympic Park where Phelps swims," Sally Jenkins, a sports columnist, wrote in the Washington Post. "Just over there, International Olympic Committee members enjoy prime seating and dine on a per diem of $450 a day, while over here, the Brazilian minimum wage amounts to $228 a month, and nobody has a ticket to the Olympics, even though it's just 50 yards away."

Rio residents spoke bitterly of the message of 'unity' being touted by the organizers of the Olympics. "So where is this unity? They destroyed my community and distanced people," Maria Da Penha Macena told the Post. "I don't understand this when they say sport is good."