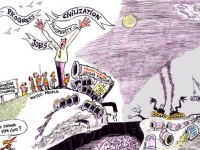 A barren 80-meter-wide scar cuts through the dry scrub of Colombia's Guajira Peninsula. Goats wander looking for food, but no vegetation yet grows over the newly built $467 million pipeline that snakes below.


The underground natural gas pipeline begins at Punta Ballenas, just northeast of La Guajira's capitol of Riohacha, Colombia. It travels south 225 kilometers until it reaches the gas refineries in Maracaibo, Venezuela. Announced in 2003 as the first step in a major regional integration project, the Trans Caribe Antonio Ricaurte pipeline was inaugurated in October 2007 by Presidents Alvaro Uribe of Colombia, Hugo Chavez of Venezuela, and Raphael Correa of Ecuador.


Currently, the pipeline carries 150 million cubic feet of gas a day, but Venezuela's minister of Energy and Petroleum, Rafael RamÃ­rez, boasts that within six years capacity will more than triple. Long-terms plans call for reversing the direction of the flow of gas and integrating the project into the much larger Plan Puebla PanamÃ¡ (PPP) and the Initiative for the Integration of Regional Infrastructure in South America (IIRSA).

Such enormous infrastructural changes will directly impact the peninsula's indigenous communities. The WayÃºu community of Mashiis-Manaa is one of the 62 settlements, or rancheria, that oppose the pipeline. Negotiations with PetrÃ³leos de Venezuela failed and WayÃºu have denounced the government for failing to consider their concerns and needs.


"This could have been something good for the company [PetrÃ³leos de Venezuela] and could have brought benefits to the communities, though they left a lot to be expected," explained Kajaschon Bonivento, the Mashiis' traditional leader. "Small windmills for electricity and pumping wells would have been a great help. These and jaweis [watering holes] are necessary for the WayÃºu."

Some 500,000 indigenous WayÃºu live on La Guajira Peninsula, which reaches into the Caribbean Sea on the northern end of South America and spans northeastern Colombia and northwestern Venezuela. The WayÃºu are the most populous indigenous nation in both countries, where they live in roughly equal numbers. The environment of the peninsula ranges from dry tropical scrub and forest in the south, to desert in the north, with tropical forests growing on the mountain ranges of the Sierra de PerijÃ¡ in Venezuela and the SerranÃ­a de la Macuira in Colombia.


Traditionally sustained by hunting, fishing, gathering wild foods, and horticulture where possible, the WayÃºu are a self-identified warrior people. The Spanish never conquered them, and only after independence from Spain in 1823, did outsiders start penetrating their region. Their society is based in matrilineal clans in which women take important leadership roles in communal affairs.


Today pastoralism, mostly goats, is a key component of the WayÃºu economy and culture. Also important, where geographically appropriate, are fishing, horticulture, harvesting salt and trafficking of contraband. Traditions such as ancient weaving techniques exist alongside new patterns of migration to large cities in search of jobs with multinational companies and tourism.

When PetrÃ³leos de Venezuela came to Mashiis-Manaa, company representatives and engineers held community meetings to convince residents that the project would benefit them. PDVSA also offered goods in exchange for support for the pipeline.  The company claims on its website that it arranged through WayÃºu leaders that communities in the path of the pipeline in Colombia would receive barbed wire, hosing, yarn, fencing posts, goats, chirrinchi and other goods.


In January 2007, WayÃºu from affected communities initiated protests, telling local media that PetrÃ³leos de Venezuela had not met with all the impacted communities and traditional leaders and that its decision on who got schools, health clinics, potable water and better services was inequitable.


The 62 affected WayÃºu communities in the municipalities of Manaure and Maicao initiated protests that paralyzed pipeline construction.


The Observatory of the Colombian Caribbean, an independent center of scientific and cultural investigation, stepped in to help advise the communities. It included local politicians, traditional authorities and matrilineal community leaders in all aspects of the negotiations.


This project is "another great wound upon WayÃºu territory," said Observatory Director Weildler Guerra Curvelo. "Of all the negotiation processes for development projects in La Guajira, [the pipeline] was the most primitive and had many deficiencies."


An April 2007 report by the Observatory claims that the communities called off protests after the company agreed to pay them $10 million in compensation. A commission including the WayÃºu and local political leaders would be in charge of allocating money to local projects.


But the reconciliation attempt failed because of the lack of follow through with the agreed negotiations. In May and in July 2007 about 3,000 WayÃºu in Colombia protested the pipeline, expelling workers from construction sites, halting construction and closing the Colombian/Venezuelan border entry near Maicao.


They rallied not only local but also international support. In September 2007 various WayÃºu women's groups - including Resguardo WayÃºu of Mayabangloma, Fonseca, La Guajira and the Fuerza de Mujeres WayÃºu - hosted the Assembly of South American Indigenous Women. The first act of the meeting of native women from across the hemisphere was to announce "solidarity with the struggle and resistance that the WayÃºu brothers and sisters are leading against the construction of the natural gas pipeline through their territory."

One of the key sticking points between PetrÃ³leos de Venezuela and the WayÃºu was whether or not the project improved the quality of life for WayÃºu. PDVSA's website claims that pipeline construction created more than 6,000 jobs in Venezuela and 4,000 in Colombia, with the majority going to people from local communities. The Venezuelan government's website lists some of the projects the company will finance, including repairing of roads and constructing schools, clinics, aqueducts, as well as projects promoting herding and agriculture. PDVSA also claimed on its website that it pledged to deliver four water tanks that would benefit some 115,000 people. Altogether the company claimed that more than $56 million had been invested into social development projects needed in local communities, many of which have yet to be completed.


"The WayÃºu have only been affected positively by this project, and have had full participation in it." PetrÃ³leos de Venezuela spokesperson Gustavo GonzÃ¡les told CorpWatch. "They are benefiting from employment and the environmental and social impacts are constantly being monitored by members of the communities in order for us to work together."


Debora Barros, a young WayÃºu lawyer and leader of the OrganizaciÃ³n WayÃºu Munsurat  disagrees. "When the company came here, it was all bad intentions," she says. "They came here promising all sorts of opportunities and benefits for the communities, something that has not been true."

Wilian, a young WayÃºu who was hired to work on the pipeline, backed her up. "When we would approach communities while installing the pipeline, the people would react badly, people would cry and yell at us. They were upset that the land and the vegetation were being destroyed. [It was] food for their herds," he said.


The former construction worker accused PetrÃ³leos de Venezuela of manipulating the community: "When the company sent their representatives here, it was to trick the indigenous," said Wilian. "The locals were ignorant and lacked advice on how much money the pipeline would be producing and how the project would be implemented. When the company could not convince the leaders or the community, they would find the people in the community that were okay with the project and accept them as community leaders to gain permission for the project."


PetrÃ³leos de Venezuela defended the project. "Since PDVSA was restructured with the Bolivarian government, we don't like to speak of compensation but rather of the benefits for the community," GonzÃ¡les said. "We are a state entity belonging to the Venezuelan people. We are not a transnational." GonzÃ¡les said he was unaware of claims that communities were inadequately compensated and that the community projects had not been materialized.

Nuchon Kay, a WayÃºu leader from Riohacha, added that PetrÃ³leos de Venezuela could easily compensate the people if it really wanted to: "The communities want reforestation projects. We want the vegetation to be brought back so that our animals like goats and cattle do not wander off looking for food elsewhere. And we want to be able to gather our local foods. In addition, the company needs to repair all the damaged or drained jaweis, repair the windmills and other water sources that are key for survival. They are the methods by which our people access precious water. The companies need to stop taking advantage of the WayÃºu and our lack of basic necessities."


And some compensation has been given. For example, Bonviento, the traditional leader of Mashiis-Manaa, who held out longer than most residents to receive any goods from PetrÃ³leos de Venezuela, eventually accepted fence posts for the construction that would occur with or without his cooperation.


But these token gestures, made after the pipeline was completed, suggest that the company was never interested in working with the communities in the first place, says Barros. "Our communities feel they have been tricked, made fools of, because these companies came in here buying off and dividing our leaders with minor favors and gifts, and were able to manipulate community support for the project."