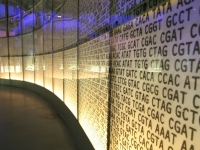 Should a private company be allowed to patent isolated human genes? A lawsuit to be heard Friday pits Myriad Genetics of Utah against the American Civil Liberties Union (ACLU). Myriad wants to be the exclusive U.S. commercial provider of genetic screening tests for breast cancer or ovarian cancer but the non-profit says the patent limits scientific research as well as health care options for women.

Myriad Genetics Inc. has filed patents on the BRCA1 and BRCA2 genes which allow it to figure out if a woman is at risk of breast cancer or ovarian cancer. The tests cost over $3,000 and no other company is allowed to do research on the genes without permission from Myriad.

"For women as they are trying to make these major life decisions, it is very helpful for them to have a second opinion. By having only a single lab offering that testing, it is impossible really to be able get that second opinion, either in the way the test is performed or in the interpretation of such a result," says Dr. Wendy Chung, a clinician and a geneticist at Columbia University. "You're essentially stuck in a situation of a mediocre test."

The Myriad screening test is also mostly based on results gathered from white women. The patent has limited further research to see if the results are accurate for women of other races, says Kim Irish of Breast Cancer Action who cites the example of Runi Limary, an Asian woman who received ambiguous results when she had genetic testing done. "Runi was told that this "variant of uncertain significance" has been seen in Asian women, and that these ambiguous results seem to come up more for women of color," says Irish.

The ACLU filed a lawsuit against Myriad, the University of Utah Research Foundation and the U.S. Patent and Trademark Office in May 2009. A federal judge ruled against Myriad in 2010 but the company won on appeal at the U.S. Court of Appeals for the Federal Circuit. This past March, the U.S. Supreme Court told the appeals court to revisit the case after it rejected a similar lawsuit.

(The other case involved Prometheus Laboratories of California which tried to patent a blood test for patients with Crohn's disease which was rejected unanimously by the Supreme Court justices.)

James Watson, one of the two scientists who discovered DNA, has filed a friend of the court brief that states: "(W)e would not want one individual or company to monopolize the legal right to the beneficial information of a human gene-information that should be used for the betterment of the human race as a whole."

The U.S. Patent and Trademark Office has long accepted claims that include DNA sequences - an estimated 35,000 such patents have been approved.

However the Obama administration has recently started to limit this approach. "The chemical structure of native human genes is a product of nature, and it is no less a product of nature when that structure is 'isolated' from its natural environment than are cotton fibers that have been separated from cotton seeds or coal that has been extracted from the earth," wrote lawyers for the U.S. Department of Justice in a legal brief in 2010. "Common sense would suggest that a product of nature is not transformed into a human-made invention merely by isolating it."

Myriad may be in for a difficult fight, given the government opinion.