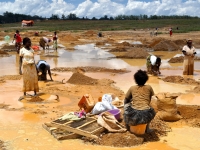 Eurasian Natural Resources Corporation (ENRC), a global mining company that got its start in Kazakhstan, has won a new $101.5 million license to dig for copper at the Frontier mine in the Democratic Republic of Congo. The company has been criticized by Global Witness for its purchases of rights from offshore companies connected to Dan Gertler, a controversial Israeli diamond merchant. http://www.globalwitness.org/library/possible-new-enrc-deal-raises-fres…

"The Congolese state has foregone billions of dollars in revenues by secretly selling off its assets on the cheap to offshore companies," Daniel Balint-Kurti, campaigner for the Democratic Republic of Congo at Global Witness said in a press release issued last month. "With so much at stake in one of the poorest countries on the planet, ENRC must do the right thing and shed full light on its dealings."

Per-capita income in the Congo is under $300 a year and experts at the Carter Centre, which was founded by former US president Jimmy Carter, say there is a reason. "In a mining sector defined by irregularities and mismanagement, large industrial mining projects can earn huge profits for investors and government officials," Sam Jones, associate director of the centre's human rights program, told the Guardian. "(L)ittle revenue finds its way back into desperately impoverished Congolese communities for schools, healthcare, or other social services."

The Frontier copper mine is located near the town of Sakania in the Congo, about a mile from the Zambian border. It is located in the copper belt that straddles the border of the two countries that has been exploited commercially from the days of Belgian colonization to this day. Indeed the profits from the Union MiniÃ¨re du Haut Katanga, the original mining company in the region, was a major source of wealth for Belgium at the beginning of the 20th century.

First Quantum, a Canadian company, acquired the rights to mine for copper at Frontier in 2001 but was forced to turn it over to Sodimco, a state owned company in 2010 by the Congolese government. The licences were then sold to Fortune Ahead, a Hong Kong shell company. Meanwhile First Quantum filed multiple legal claims demanding $4 billion in compensation for Frontier and other assets nationalized by the Congolese government.

In January this year First Quantum agreed to turn over all its prior mineral rights to ENRC for $1.25 billion. ENRC had already bought rights to the giant Kolwezi tailings project for $175 million and purchased CAMEC, yet another Congolese company that owned a half share in the SMKK copper and cobalt mine.

But exactly who paid whom how much for mining rights in the Congo is up for debate. "ENRC's purchase of its stake in Kolwezi was structured through a deal between itself and at least seven companies registered in the British Virgin Islands, all connected to Dan Gertler," states a Global Witness fact sheet. "When ENRC bought the remaining 50 per cent stake in SMKK, it purchased it from another British Virgin Islands company linked to Mr Gertler. Even ENRC's acquisition of CAMEC involved sale purchase agreements with several offshore companies linked to Dan Gertler which held shares in CAMEC."

Gertler, an Israeli diamond merchant, has been doing business in Congo for over a decade, working first with Laurent-DÃ©sirÃ© Kabila, the former president of the Congo, and now with his son, Joseph Kabila, the current president.

"The nature of these deals raises serious questions about whether corrupt Congolese officials could be benefitting from Congo's considerable mineral wealth at the expense of the Congolese people," says Balint-Kurti. "Global Witness has been calling for ENRC to publish the full results of an external audit into its dealings in Congo, conducted by the law firm Dechert."

It is certainly not the first time Gertler and the Kabila clan have been linked. A lawsuit filed in Israel by Yossi Kamisa, a former Israeli fighter who worked for Gertler, says that the diamond tycoon had offered the elder Kabila military aid to the Congolese army in 2000.

"At the time, the Second Congo War (1998-2003) was raging - one of the most brutal conflicts in the history of the African continent, involving eight countries, dozens of guerrilla organizations and a horrific human toll that included large-scale rape and even cannibalism," write Gidi Weitz, Uri Blau and Yotam Feldman in Haaretz newspaper. "This did not deter Gertler from realizing his plan to penetrate the lucrative diamond market in the DRC."

Kamisa's lawsuit charges that he "witnessed Gertler's method of operation, involving paying considerable sums of money as bribery to different individuals in the Congo government ... all in order to pave the way to a meeting with the president of Congo and to improve the terms of the future agreement that was to be struck between him and the state."

Gertler denied these allegations, calling them vengeful and baseless, says the newspaper.