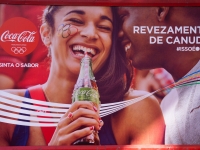 Cities that host Olympic games spend several billion dollars on new infrastructure, security and of course on pomp and glamor. The sponsorships are seen as a way to recoup as much as 40 percent of these costs by offering companies the opportunity to use the official logo on their products. "The Olympic Games are one of the most effective international marketing platforms in the world, reaching billions of people in over 200 countries and territories throughout the world," claims the official Olympics website.

But by allowing fast food sponsors, the Olympics have effectively been turned a 'carnival of junk food marketing' says Malcolm Clark, coordinator of the Children's Food Campaign in the UK. "We don't think McDonald's or Coca-Cola should be sponsoring the Olympics because of the way children are affected by the halo effect of their advertising," Clark told Campaign magazine. "It's also completely false to claim the Olympics would suffer without this sponsorship money. It's a small amount compared with TV and other media rights. The Olympics might be a little less shiny without it - and IOC delegates might not get to stay in luxury hotels."

Media reports suggest that McDonald's paid £75 million ($97 million) in 2012 to sponsor the Olympics until 2020. Coca-Cola paid out £33.7 million ($44 million) to sponsor the Rio games. In comparison, NBC paid roughly $1.226 billion for broadcast rights, which equals roughly a quarter of the Rio Olympics $4.6 billion budget. (Ticket sales to date have brought in $323 million)

Not surprisingly the food industry defends their association with the games. "Coca-Cola and McDonald's are among the world's most responsible companies. Being involved in the Olympic family and sharing its values allows both sides to benefit from the special value of such relationships," Ian Wright, director general of the UK Food and Drink Federation, told Campaign. "You also have to remember that the source of the controversy is invariably Western and metropolitan. Asian and Latin American countries have no problem with companies that behave responsibly."

But Brazilian activists were outraged by Wright's comments. "We find the Food and Drink Federation's comments to be offensive. In Latin America, these two companies-Coca-Cola and McDonald's-represent one of the main vectors of the obesity and diabetes epidemic in our region," Alejandro Calvillo Unna from Consumer Power wrote in a statement to Newsweek. "They deny the scientific evidence about the harm their products generate, they manipulate children, use misleading advertising, and invest millions of dollars in lobbying to impede the development of policy measures in countries that are working to combat obesity and chronic disease."

Indeed the majority of Brazil's 210 million population is considered to be obese, including 39 percent of children, an astonishing 1000 percent increase in the last 40 years.

"If these companies did indeed act responsibly they would not advertise to children," Dr Fabio Gomes, a Brazilian public health nutritionist and World Health Organisation regional adviser on nutrition told the Guardian newspaper. "They would not send their licensed clowns to Brazilian schools to hook children on their brands and products and they would not promote sugary drinks and energy-dense products that are not recommended by Brazil's official food-based dietary guidelines."

Meanwhile, McDonald's bought itself extra media promotion by giving away food to athletes in the Olympic village who unashamedly posted pictures of themselves bingeing on the company's products. "Now it's time to eat some junk food after months of eating clean!" wrote Sawan Serasinghe, an Australian badminton player, after he lost to Taiwan.