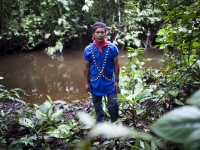 The Dutch Supreme Court recently upheld an arbitration tribunal judgment requiring the Ecuadorean government to pay Chevron $106 million for breach of contract. Ironically, activists say Ecuador is now free to hand this money to indigenous communities who have sued the oil giant for pollution in an unrelated case.

The second case stems from a company called Texaco from New York which was a minority partner in an oil-production consortium in Ecuador along with Petroecuador, the state-owned oil company, from 1964 to 1992. In 1993, Ecuadorean communities sued Texaco in its home state of New York for dumping billions of gallons of toxic waste into the rainforest that allegedly caused "a wave of cancers and other environmental problems that have decimated indigenous groups."

The company disputed the lawsuit and claimed that their written agreements with the Ecuadorean government had fully released Texaco from any further liability, and it was Petroecuador that failed to conduct the cleanup. Moreover Texaco noted that Petroecuador continued to operate and expand oil operations in the former concession after Texaco ended its Ecuador operation in 1992.

In 2001, Texaco merged with Chevron, an oil company in California. Two years later a U.S. federal judge granted Texaco's repeated requests to move the trial to Ecuador. Unfortunately for Chevron, in 2011 a local court ruled that the company was responsible for the damages and ordered the company to pay $19 billion to the Amazonian communities. In 2013, the Ecuadorean National Court of Justice, Ecuador's highest court, upheld the decision but reduced the fine to $9.5 billion.

To date Chevron has refused to pay a penny of the $9.5 billion judgment or accept blame for polluting the Ecuadorean rain forest. The company claims that the Ecuador judgment is not enforceable "in any court that observes the rule of law" despite the fact that Texaco itself requested the trial in Ecuador.

Claiming that the Ecuadorean trial was "a product of fraud" Chevron has vowed to fight the Ecuadoreans "until hell freezes over, and then we'll fight it out on the ice."

Chevron is now attempting to block the Ecuadorean judgment in U.S. federal courts. The company has filed a Racketeer Influenced and Corrupt Organization (RICO) lawsuit against a number of the parties involved in the case, including Steven Donziger, one of the lawyers for the communities, environmental activists, and even its own shareholders.

The Ecuadorean communities are unable to collect any money from the company since Chevron has no assets left in the country. The villagers have taken the fight to Argentinian, Brazilian and Canadian courts, hoping to make Chevron comply with the Ecuadorean ruling by seizing assets held by the oil company's subsidiaries in other countries.

(It should be noted that in 2013, Chevron had a net profit of $21.4 billion on sales and other operating revenues of $220 billion. The company's $227 billion market valuation is more than twice the size of Ecuador's annual economic output.)

Meanwhile, Texaco had also been involved in a separate and long-standing dispute with Ecuador dating from contracts drawn up in the 1970s. The company claimed that the government had taken more than its fair share of oil during the original production sharing agreement. Ecuadorean courts refused to hear this case so in 2006 Chevron decided to seek arbitration through the Permanent Court of Arbitration in the Hague.

The arbitration court ruled in Chevron's favor, so Ecuador appealed in local Dutch courts. Ecuador's appeal was first denied at the district level and then at the Supreme Court, which ruled on September 26 that Ecuador's 1997 U.S.-Ecuador Bilateral Investment Treaty prevented Ecuador from disputing judgments and ordered the government to pay Chevron $106 million plus interest.

Ironically, this $106 million arbitral award might be a game changer for the Amazonian communities. After all, if the Ecuador government pays the money out, it is likely to be Chevron's only substantial asset in Ecuador, say activists.

"Chevron cannot on the one hand refuse to pay a valid final court judgment in its chosen forum of Ecuador, and on the other hand pretend to collect a separate judgment against Ecuador's government in an unrelated case," Steven Donziger, one of the attorneys for the Ecuadorean communities was quoted saying in a recent press release. "Such selective enforcement would show favoritism toward a wealthy litigant and would undermine the rule of law for everybody."

Simon Billenness, a human rights activist, believes that the rainforest communities would likely make very good use of the $106 million. "It could be used in part to pay for remediation of the oil pollution, and it could be used to fund new legal enforcement actions to seize Chevron's assets outside Ecuador to collect fully on the $9.5 billion judgment," he wrote on his blog for the CSR Strategy Group. (Billenness is one of the individuals that Chevron has sued to prove its racketeering case against Donziger)