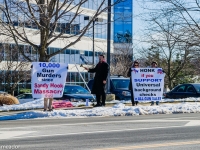 Gun manufacturer Remington and its insurers have agreed to pay $73 million to kill a lawsuit over the company’s marketing of military-style weapons to the general public – specifically the Bushmaster AR-15 - used by a gunman to kill children at the Sandy Hook Elementary School in Connecticut in 2012.

The settlement has been hailed as a major victory for campaigners against gun violence, who have long been stymied by the powerful weapons industry that contributes millions of dollars to politicians in the U.S.

On December 14, 2012, 20 year-old Adam Lanza, shot and killed his mother, and then drove over to the school and opened fire killing multiple adults and 20 children – many of whom were as young as six – and finally killing himself. The principal weapon that he used was the Remington Bushmaster AR-15 - a civilian semiautomatic version of the military M16 assault rifle.

Two years later, the families of nine victims sued Alabama-based Remington, arguing that the company had aggressively advertised the gun as way for members of the general public to prove their manliness.

Almost a decade after the massacre, after many legal twists and turns, the company’s lawyers have agreed to pay the families to drop the lawsuit.

"This landmark, historic victory sends a forceful and compelling message to manufacturers and to the insurance and banking industries that support them," Nicole Hockley, whose 6-year-old son Dylan was killed in the shooting, told a press conference. “You will be held accountable.”

"We established what was clearly true, the immunity protecting the gun industry is not bulletproof," Josh Koskoff, the lawyer for the families told the same press conference. "Insurance companies, it's time for you to start treating the gun industry like you treat me every time I get a speeding ticket - you raise my rates. Have you ever heard of an insurance company standing behind an insured that has no care whatsoever for the risk they're creating?"

Over the course of the last eight years, the lawyers and families patiently attended court hearing after court hearing to make their argument, showing advertisements that Remington had used to sell its wares.

"Forces of opposition, bow down," was one of the company’s sales pitches. “You are single-handedly outnumbered.” Another one stated: "Consider your man card reissued."

Still other online advertisements play on the idea that owners of a Bushmaster are real men. “To become a card-carrying man, visitors of bushmaster.com will have to prove they’re a man by answering a series of manhood questions. Upon successful completion, they will be issued a temporary Man Card to proudly display to friends and family,” a company press release announced.

"The purpose is to sell products," James Vogts, Remington's lawyer told a 2017 court hearing. "Emotional ads are commercial speech. They are under First Amendment protection," he added, referring to a U.S. law that prohibits the government from restricting citizens from saying anything they want to say.

Vogts noted that he believed that the Bushmaster was not really a problem. "This rifle is owned by millions of Americans across the country for hunting, target shooting and home protection," he said.

"It wasn't just that they marketed the weapon looking for people with the characteristics of Adam Lanza,” Koskoff told the same hearing. “It's that Adam Lanza heard the message, and was driven specifically to the Bushmaster for his weapon for this combat mission."

When the lawsuit was first heard in court, Remington invoked the Protection of Lawful Commerce in Arms Act of 2005, that shields legal gun manufacturers and dealers from being sued over the use of their products, an argument that the courts initially accepted in 2016.

But then, on appeal, the lawyer for the victims’ families refined their argument in 2017 to argue that the company’s marketing materials were in violation of a Connecticut statute that outlaws deceptive marketing practices – specifically because they were marketing a military-style weapon for public use - so the courts agreed to hear the case.

Remington then appealed to the U.S. Supreme Court which refused to hear the case in 2019.

Meanwhile, Remington twice declared bankruptcy – not because of the lawsuit but because of financial mismanagement by Cerberus Capital Management – temporarily delaying the lawsuit.

When the families won the right to a 2021 jury trial which would have forced the company to disclose potentially damaging internal documents, Remington decided to offer $33 million to the families to drop the lawsuit last July.

The families initially rejected the offer but accepted a revised offer of $73 million in February.

The final deal has even won the praise of President Joe Biden. “While this settlement does not erase the pain of that tragic day, it does begin the necessary work of holding gun manufacturers accountable for manufacturing weapons of war and irresponsibly marketing these firearms,” he said in a statement.