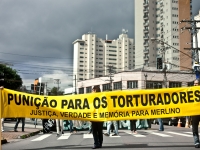 Volkswagen's subsidiary in Brazil has been accused of providing material support for torture conducted by the military dictatorship during its 21 year reign from 1964 to 1985. Details of the role of the German car manufacturer emerged in the final report of a national Truth Commission issued last month.

Based in Wolfsburg, Germany, the Volkswagen group is the world's second largest automobile manufacturer with a global sales revenue of â‚¬197 billion and a profit of â‚¬9 billion in 2013 ($256 billion/$12 billion). It employs 570,000 workers and sells around ten million cars a year. Volkswagen do Brasil has been producing cars since 1953 and employs over 24,000 workers in the country today.

"They held my arms behind my back and immediately put me in handcuffs. As soon as we arrived in Volkswagen's security center, the torture began. I was beaten, punched and slapped," Lucio Bellentani, a former Volkswagen employee at a company plant in Sao Bernardo do Campo, near Sao Paulo, told the commission about his experiences in 1972.

The Truth Commission was set up by Dilma Rousseff, the president of Brazil, to investigate what the government did to the people who fought against the military regime. The investigation was of particular interest to Rousseff, who was tortured herself.

A final 1,000 page report, which was published in December 2014, documents the killing and disappearing of 434 people. The commission stated that "these are only the cases it was possible to verify ... despite obstacles to the investigation, notably the lack of access to armed forces' documentation, which is officially said to have been destroyed." Thousands of people were imprisoned for political reasons and an estimated 6,000 people were tortured.

The report concludes that over 80 national and international business companies collaborated extensively with the military government. These companies provided intelligence about their employees, handed over individuals to the Department of Political and Social Order (the former police administration centre, prison and torture chamber) and even financed pro-government paramilitary forces, such as the Operacao Bandeirante.

In February 2014, the commission decided to dig deeper into the relationship between the military regime and Volkswagen.

According to the investigators findings, a special agency named the Centro ComunitÃ¡rio de SeguranÃ§a (CECOSE) was set up in 1983 where army and military police officials met with representatives of 25 major companies. The report states, that "the representative of Volkswagen played a huge role in the meetings, initiated talks about most important issues and prepared comments in the form of 'reminders' to CECOSE."

The "documents show with exceptional clarity how companies expected the government to help them solve their problems with their workers," Sebastiao Neto, a member of the Truth Commission, told Reuters. "Low workers' wages were considered a key to economic growth in Brazil."

Among the people that Volkswagen monitored was Luiz Inacio Lula da Silva, a prominent union leader, despite the fact that he was not employed by the company. Lula, who later rose to become president of Brazil between 2003 and 2010, told the Volkswagen workers at the time that their management was spying on them.

The Truth Commission has recommended that the Brazilian military own up to its activities during the dictatorship.

In Germany, an activist coalition of 20 NGOs named "Nunca Mais - Nie Wieder" has sprung up to demand details about the role of German companies, individuals and institutions that supported the Brazilian military. Academics like Nina Schneider, a Latin American historian at the University of Konstanz, specifically want to know how much the German parent company knew about what was happening in Brazil. "This needs to be clarified, and Volkswagen must state its positions," she told Deutsche Welle radio.

Controversy is not new to Volkswagen's Brazilian operations. Franz Paul Stangl, the former Nazi camp commander of the death camps at Sobibor and Treblinka, escaped Germany to Brazil where he worked for Volkswagen in Sao Bernardo do Campo for 15 years. Stangl was extradited in 1967 and found guilty for the mass murder of 900,000 people.

After the Truth Commission report was published, Volkswagen agreed to pursue "any indication of possible involvement of the employees at Volkswagen do Brasil in human rights violations during the period of military dictatorship," a company spokesperson told Deutsche Welle. Manfred Grieger, head of Volkswagen's corporate history department, noted that the company has tried to be honest about its past, noting that Volkswagen has reported extensively about its role in Germany during the First and Second World Wars.

But to this day, Volkswagen continues to be a controversial employer in Brazil, most recently for alleged anti-union practices. At the end of last year, Volkswagen decided to dismiss 800 workers from its Anchieta plant in Sao Bernardo do Campo, citing the ongoing economic crisis in Brazil.

The union argued that the dismissals violated the contract the company signed guaranteeing the workers' jobs until 2017. "We cannot accept these massive layoffs," Wagner Santana, the chief of the Sindicato dos MetalÃºrgicos do ABC union, said in a press statement.

Volkswagen workers responded by staging an occupation of the plant in Anchieta and shutting down the production line after the New Year, Junge Welt reported. The following week, some 10,000 auto-workers including employees from Ford and Mercedes Benz, staged a major protest against layoffs.

The workers demanded that the company guarantees job security in times of economic turbulence. "This protection already exists in some countries confronting crisis situations, as is the case with Germany itself, where Volkswagen's parent company is," Santana said.

Last week, Volkswagen backed down and agreed to rehire the 800 workers and resume negotiations to revise the collective bargain agreement. 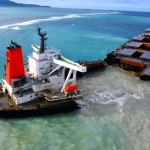 MV Wakashio, a Panamanian-flagged bulk carrier owned by Nagashiki Shipping and chartered by Mitsui OSK Lines, hit a coral reef off the coast of Mauritius in late July. Over the course of the next few weeks, the vessel split in two spilling fuel oil and creating an ecological disaster.