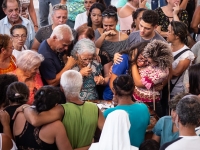 A Brazilian judge has ordered Vale to compensate families of some 300 people killed at the company’s Córrego do Feijão iron ore mine when a dam built to hold waste collapsed on January 25, 2019, near the town of Brumadinho in the state of Minas Gerais.

Nearly $3 billion worth of Vale’s company assets have been frozen in order to ensure that there is money for future payouts. "The value [of the compensation] is not limited to the deaths resulting from the event, it also affects the environment on a local and regional level as well as the economic activity in the affected region," Judge Elton Pupo Nogueira wrote.

Vale, which was originally named Companhia Vale do Rio Doce (CVRD), was created in 1942 by the Brazilian government as a state run entity. The company was mostly privatized in 1997 but, to this day, the Brazilian government still plays a critical role in company operations. Vale now operates in over 30 countries and produces more iron and nickel ore than any other company in the world. Its iron ore mine in Carajas counts as the largest iron ore mine world wide.

The company operates 133 dams at its iron ore mines, of which 90 are “tailings” dams. (Tailings, the byproducts of mining operations, can be liquid, solid, or a mixture of both, and are often toxic.) These dams consist of earth filled embankments made mostly of dirt and mud that are often incorporated in the tailings themselves as part of the structure. Because tailings can liquify in seismic, or even normal conditions, these dams can lose stability more easily than other dam designs.

Vale maintains that it took the necessary steps, required under the law, to check up on the stability of the Brumadinho dam. The company notes that in September 2018 an inspection by Tuv Sud, a well known inspection and product certification firm in Germany, reported that the dam had “perfect stability.”

"We are 100 per cent within all the standards, and that didn't do it," Fabio Shvartsman, who was Vale’s CEO at the time that the disaster occurred, said in a televised interview

But Tuv Sud has recently become implicated in the dams collapse. The BBC obtained emails showing that Tuv Sud and Vale knew the dam was vulnerable and would not pass inspections, just months before it collapsed. Here are some of the email excerpts published by the BBC:

13 May 2018: "We're finishing the studies about liquefaction of the dam B1, but everything points that it won't pass."

15 May 2018: "The results and figures leave us in a very vulnerable position."

Investigators say that Tuv Sud ‘solved’ the problem of making sure that the dams passed inspection, after two other inspection firms refused to certify the dams. For example, Tuv Sud added unusual conditions to the pass certificate such as making it dependent on having no explosions near the site. (It is unclear who requested these conditions for the dam)

The Brazilian government has ordered an investigation into why the disaster occurred. “Why did the equipment, the monitoring, not identify this bigger quantity (of water) than is allowed? Because everything led to the belief that it all was within the standards,” Alexandre Vidigal de Oliveira, Secretary of Brazil’s Mining and Energy Ministry, told Reuters news agency. “It’s important to know the real truth of what happened.”

"Vale's tragedy is a series of tragedies," an initial report issued by a Brazilian Senate committee states. “The immeasurable human loss; the countless dead animals; the environment destroyed for years, perhaps decades; the dreams and heritage of a lifetime buried by the carelessness, neglect, greed, usury, irresponsibility, indifference and sloppiness of a company that used to be a role model."

So far, eleven employees of Vale and two contractors of Tuv Sud who inspected and cleared the Brumadinho dam shortly before its collapse, have been arrested. In addition, Vale has temporarily suspended Fabio Shvartsman, the company CEO, as well as several executives: Lucio Cavalli, Peter Poppinga and Silmar Silva.

The collapse is the worst industrial accident in Brazil’s history but it is not Vale’s first such disaster. In 2015, the collapse of the Mariana dam at the Germano mine, also located in Minas Gerais, killed 19 people and caused some 60 million cubic meters of toxic iron mine waste to flow into the Doce River. The toxic waste flowed down the river for 17 days until it reached the Atlantic Ocean, displacing hundreds of people and causing water shortages for towns along the river.

Some environmental experts believe that the collapse of these dams could have been avoided. Andréa Zhouri, coordinator of the Environmental Issues Studies Group of the Federal University of Minas Gerais, says the Brumadinho catastrophe and others like it are not "natural disasters," but "political-institutional failures." Zhouri, and other experts believe that stricter regulations, such as stricter licensing laws or state-oversight committees, along with the implementation of more modern technologies would go along way to prevent such tragedies.

Meanwhile an investigation by the New York Times has concluded that some 87 dams in Brazil were built in a similar fashion to that of the Brumadinho mine. Twenty seven are directly upstream of cities or towns threatening upwards of 100,000 people. Of these, just four have been rated by the Brazilian government as being in more stable condition then the collapsed dam.

Since the Brumadinho dam collapse, the Minas Gerais state courts have ordered Vale to halt operations at eight other tailings dams, including one at the Brucutu mine, the company’s largest in Minas Gerais, which produces some 30 million tons of iron ore annually.

Vale has challenged the court order. “Vale therefore understands that there is no technical basis nor risk assessment to justify a decision to suspend the operation of any of these dams. However Vale has announced plans to decommission ten of its upstream tailings dams, similar in construction to the Brumadinho dam, over the next three years,” the company said in a statement.

How far Brazil will continue to crack down on Vale remains to be be seen given the recent election of far-right Brazilian President Jair Bolsonaro. During a televised speech on the large Renca rainforest reserve in April 2019, three months after the dams collapsed, Bolsonaro said: “Let’s use the riches that God gave us for the wellbeing of our population. You won’t get any trouble from the Environment Ministry, nor the Mines and Energy Ministry nor any other.”