Booming Chinese Demand Has Ripples Down Under In Queensland 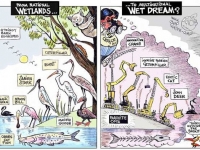 "You could open up the book on any tropical bird and you'll find it here," says Tub Wilson, as he looks around the creek on his former property, a 60-acre spread adjacent to the Keela wetlands in northern Queensland, Australia. "Jeez, I'm going to miss this," he sighs. His friend, Maria MacDonald, agrees: "It's just majestic, beautiful. It's got a special aura about it. It's timeless, a real spiritual place."


Tub's property will probably be swallowed up by the state government's massive industrial plans for the wetlands that include expanding the port and the railway, and building a new alumina refinery. Wilson mounted a three-year resistance to the development but recently agreed to sell his land to the Ports Corporation of Queensland, for fear that it might soon be worthless. However, both Wilson and MacDonald continue to organize against the development.


MacDonald has just returned from her local shopping center in the nearby town of Bowen with 70 signatures for her petition against construction of the refinery, which is one of the biggest new schemes being planned for the area. "I want to get the community to feel valued, to feel that their opinions matter. Community spirit is very much down," she says. "We need to care for one another, but everyone's a bit scared to share."

The new developments are part of the state government's Northern Economic Triangle strategy (which former Premier of Queensland, Peter Beattie, defines as "all about taking advantage of the present global surge in demand for minerals and metals."). It also aims to boost the local economy through the development of infrastructure, such as the expansion of the Abbot Point Coal Terminal, from an annual capacity of 12 million tons to 21 million tons, with the port eventually set to grow to a capacity of 100 million tons. According to the Queensland Government, the expansion of the Abbot Point Coal Terminal will necessitate further development of existing rail networks.


One of the major projects in the Triangle strategy is the refinery, which may soon be developed in Keela or one of two neighboring areas by Chalco (the Aluminum Corporation of China Limited). This is a joint stock company set up in 2001 and now listed on both the New York and Hong Kong stock exchanges. Chalco is China's largest alumina and primary aluminum producer and the world's second largest alumina producer.

"Everything in mining is international -- the demand, the capital and the resources are all international," says Chalco executive Wenfu Wang. "So now it is a strong priority for us to invest more overseas, and Australia is certainly top of the list."


One statistic underpins the struggle over Chalco's bauxite mining and refinery plans: Australia has 22 per cent of the world's bauxite reserves, China 2 per cent.


Chalco has already secured access to the raw material it needs for the refinery -- in 2006 it beat nine bidders to win the rights to mine for bauxite at Aurukun, up on the Cape York Peninsula, on the western coast of Queensland. This concession was initially owned in the 1970s by Pechiney of France, but left untouched because it was deemed to be unviable.


Wenfu Wang told reporters that the level of silica and other impurities in Aurukun "is almost identical to what we've been mining for the past 50 years in China, so that's an expertise not many Western companies have." A delighted Queensland Premier, Peter Beattie, boasts that Chalco's A$3 billion (US$2.7 billion) development is "the biggest single investment in the history of Queensland."


Chalco is seeking A$300 million in government subsidies to build "common user infrastructure" such as roads and a bauxite loading facility -- which will add to the impact of existing mines.


Now the Queensland government is offering Chalco the option of constructing a new refinery to process the bauxite in one of three places: the industrial town of Gladstone, on the fringes of Townsville or on the Keela wetlands.


State government ministers declined to talk to CorpWatch about the refinery, but activists are up in arms. James McLelland of the Northern Queensland Conservation Council says that the bid to attract heavy industry to the Keela wetlands is "absolutely ludicrous." Queensland's coastal strip, he laments, "is being hammered."

The Aurukun bauxite deposit is predominantly found underneath Tetrodonta Forest, while the mining lease area is also comprised of paper bark woodland, grassland and rainforest. Altogether, the complex Cape York ecosystem has 264 endemic plant species, 50 endemic terrestrial vertebrate species, 195 endemic invertebrate species and 16 endemic bird species. (Over 80 per cent of the Tetrodonta woodlands are covered by bauxite mining leases and exploration leases with companies like Chalco.)


Kerryn O'Conor, campaigns manager for the Wilderness Society, points out that forests of Darwin stringybark (a type of eucalyptus) occur only on bauxite soils, and that she knows of no instances where the original forest has been restored after mining. An Initial Advice Statement prepared for Chalco made the same point.


O'Conor also warns that bauxite mining threatens the region's rivers "by significantly impacting on the ecological integrity of the catchments through broadscale land clearing, water extraction, alterations to hydrogeology and drainage, and weed infestations."


The Watson and Archer rivers are particularly at risk from Chalco's plans, say the environmentalists. The rivers are abundant, as well as being home to rare species such as Obbes catfish and the Delicate blue-eyes fish.


Birds are also threatened by the development. Egret, spoonbills, black swans, magpie geese, jabiru (the only stork found in Australia) and Brolga are among the many species in the wetlands just north of Bowen, one of the proposed sites for the refinery.


The other two potential sites for Chalco's alumina refinery, Bowen and Townsville, would also be adversely affected by the siting of a refinery. Townsville is barely 10 kilometers from the city center. McLellland says that southerly winds blowing along the coast would ensure that refinery emissions would be swept right across the city.


And Gladstone, which is already a heavy industry area, is already suffering. "The whole place is just bloody polluted," says Wilson. "All the birds up there are full of toxins and they're dying."

Close to the Aurukun bauxite resource is the aboriginal community of Aurukun, which some commentators have likened to a failed state. Alcohol and substance abuse is rife and unemployment is astonishingly high. One in ten people are in jail for petty crimes, and relations between community members and the police are particularly poor. In January of 2007, allegations of police brutality sparked a riot involving 300 people.


The history of community involvement in mining in this region has not been good. A little less than 100 kilometers from Aurukun is Weipa, a bauxite mine run by Rio Tinto since the 1950s. At the time the Wik and Wik Way, the traditional landowners, did not have full Australian citizenship rights and were neither consulted nor compensated. Even today, less than one in six workers at the mine site are from the community


But in 1996, the Wik and Wik Way set a precedent for aboriginal land claims in Australia by winning a lawsuit over pastoral leases. As a result of amendments to the Native Land Title Act resulting from such lawsuits, the Wik and Wik Way community was able to negotiate an Indigenous Land Use Agreement with Chalco before they got access to the bauxite deposit.


Philip Hunter, partner at legal firm Ebsworth & Ebsworth, who has been advising the Aurukun community, told The Age newspaper said that the agreement was unique: "It certainly hasn't been done before in Queensland, or probably anywhere else in Australia," he said. "As to whether it will ever be done again, time will tell. If the project doesn't bring enough of a return, probably not."


However, not everyone in the community is satisfied and opinions differ about how the potential revenue will be utilized. On August 20th, 2007, a series of riots erupted in Aurukun, with the community outraged over the Indigenous Land Use Agreement signed with Chalco. The riots involved 200 people and led to 24 arrests.

With ecological systems on the Cape York Peninsula and the east coast of Queensland already suffering, the Chalco development has the potential to cause further damage to important river networks and wetlands. Community anger towards the Chalco's bauxite mine has already boiled over in Aurukun, while opposition to their proposed alumina refinery is mounting.


But the promise of windfall revenues from the resources sector has far more clout with the government authorities. "It doesn't seem to compute in my brain. I don't know what makes these people tick. They're just tearing this country apart," says Tub Wilson. "When it comes down to it at the end of the day, you can't eat money, can you?"