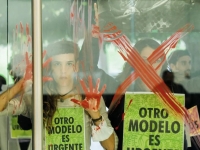 Bayer, the giant chemical and pharmaceutical company, which in 2018 bought up Monsanto, the seed and pesticide giant, to become one of the most powerful agribusiness companies in the world, say the activists, sells multiple products that are deeply destructive to the natural environment, such as toxic pesticides and GMOs, an acronym for genetically modified organisms (ie a plant or animal whose genetic material has been altered in a laboratory).

The protests were organized by groups like Movimento dos Trabalhadores Rurais Sem Terra (MST or the Landless Workers' Movement) in Brazil and by the GMO Free Venezuela Campaign.

“We are here to make an explicit complaint against the advancement of the agribusiness model in our country, which is an open-air laboratory for the new GMOs,” Flavia Broffoni, a member of Extinction Rebellion in Argentina, told Agence France Presse news agency.

“Monsanto implements a type of industrial agriculture that does not favor people or ecosystems, treating agriculture only as a business, not as a form of sovereignty, nor as a form of healthy eating,” Gisella Perdomo, one of the organizers of  the protests in Venezuela, told Brasil de Fato, a Brazilian news site.

Bayer issued a statement in response to the São Paulo protest: “We are aware of the concerns of the protesters, but we are convinced, at the same time, that we need seeds with innovative technology, crop protection and digital solutions to face some of our biggest challenges today: producing enough food for a growing world population using fewer resources.”

But the protestors are keen to point out that this ‘innovative technology’ includes selling chemicals that have been banned in most of Europe, which have taken a huge toll on human health. Three recent reports, by activist groups, on the role of the two companies highlight these problems.

The first report is “Double Standards and Hazardous Pesticides from Bayer and BASF,” published by INKOTA, Misereor and Pesticide Action Network in August 2021, which shows that ever since the election of Jair Messias Bolsonaro to be president of Brazil in 2019, Bayer has been accelerating the approval and production of banned pesticides for sale to Brazil, to turn Brazil into the second-largest market for Bayer’s agricultural division.

The second report is “EU-Mercosur: Double standards concerning agrotoxics How the EU and German companies profit from the sale of pesticides detrimental to biodiversity,” published by Greenpeace in May 2020 that identified 71 Bayer pesticides for sale in Brazil that contain 17 ingredients that are banned or heavily restricted from use in the European Union like chlorpyrifos and imidacloprid. Chlorpyrifos and imidacloprid are so toxic that just one gram of each is theoretically enough to kill eight and six million bees respectively.

“The large corporations from the agricultural sector end up focusing on countries with more permissive regulations, like Brazil, Paraguay and Argentina,” Alan Tygel, coordinator of the Brazilian Permanent Campaign against Pesticides and for Life, told Deutsche Welle.

And the third report “Advancing Together? A critical balance sheet of Bayer-Monsanto after one year,” published by INKOTA and Misereor in April 2019, found that cancer rates had skyrocketed in the state of Mato Grosso in Brazil where pesticide use was 52 times the national average. In the thirteen municipalities in which soy, corn and cotton were grown between 1992 and 2014, 1,442 cases of esophageal, gastric and pancreatic cancer were reported.

The Advancing Together report also looked at glyphosate, the active ingredient in RoundUp, Bayer’s controversial weedkiller, whose use has increased by around 2,000 percent in Argentina over the past 20 years to some 200 million liters of the pesticide used annually.

Glyphosate, which has been found in the soil, water, and food of villages where the pesticide is used, as well as in the blood and urine of the population, has been linked to birth defects, DNA damage, miscarriages and cancer.

For instance, the incidence of cancer in children increased from 11.3 to 15.7 per 100,000 between 2001 and 2007 in the province of Chaco, in northeast Argentina, according to data gathered by local pediatric hospitals. In the town of La Leonesa in Chaco, close to the border of Paraguay, where locals used the highest amount of pesticides, cancer rates tripled over a two decade period compared to other towns in the region where pesticide use was “medium” and child cancer rates actually decreased or stayed the same.

Although glyphosate is currently not banned across the European Union, Austria issued a total ban on the pesticide in 2019, while Germany announced in 2021 that it would be phasing out the product by 2024. Several other European nations, like the Czech Republic, Italy and the Netherlands have also passed laws to restrict the use of the weedkiller.

Bayer issued a statement to respond to the Advancing Together report, claiming that all their products “have been carefully tested for safety for humans, animals and the environment and that they have been approved by the relevant regulatory authorities.”