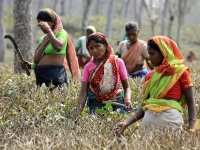 Syed Tea and Land, a Bangladeshi company, has been accused of using armed men to evict ethnic minority communities in order to expand a tea plantation in Sreemangal in northeastern Bangladesh. The expansion will impact Kandas, Khasis and Tantis who have lived in the area for a century.

"For four generations, we have lived on this land but never before faced such a threat to survival," Atit Kanda, a local tribal farmer, told Union of Catholic Asian (UCA) News earlier this month. "The armed mobs have destroyed about 4,000 to 5,000 of my pineapples worth 90,000 taka (US$1,150). I don't know if I will be able to overcome this loss."

Some 160 tea plantations dot northeastern Bangladesh. The companies that own them mostly market their products to the domestic market and are not as well known as their counterparts in India and Sri Lanka who export to every corner of the world. But the estates in all three countries depend on poorly paid workers who have lived inside the plantations for generations under conditions that date from colonial times when the British first introduced the beverage. (See "World Bank Agrees to Investigate Labor Conditions at Indian Tea Company" about conditions in the neigboring state of Assam.)

In Sreemangal, many of the tea workers are settlers from neighboring India, who moved to the area as far back as the 1850s when they signed work contracts. Many are Hindu, some are Christian, and most are tribals, unlike the owners who are generally Bengali and Muslim. Some of the settlers have cultivated fruit like lemons, guavas and pineapples on the land that they live which they sell in the local markets.

However, none of the tribal settlers have title to the land, which the government has gradually turned over to the tea companies. Syed Tea and Land, for example, says it now has the right to clear the area and that the villagers have attacked their workers.

"We have generously allowed tribals to reside and cultivate the land, but it is frustrating that they claim it as their own," Syeda Gulshanara, owner of Syed Tea and Land, told UCA News. "Our men didn't destroy their homes and crops, but some damage was done while they tried to clean up the area for the estate expansion."

Other Sreemangal tea plantations have also been accused of trying to evict the tribals. One year ago, Pijush Bhattacharya, the manager of Nahar Tea Garden, was accused of leading a mob of people to seize the land of a village called Nahar Punjee-1, where Khasis have lived for over 100 years. The conflict led to a series of protests by local human rights activists, according to the Kapaeeng Foundation, a Bangladeshi organization that supports indigenous communities.

Nor is the situation of the tribal people on the two tea plantations unique, say the activists.

"Unfortunately they remain socially excluded, low-paid, overwhelmingly illiterate, deprived and disconnected," wrote Philip Gain, director of the Society for Environment and Human Development in the Daily Star newspaper. "The reality is that many of them have never stepped out of the tea gardens. Social and economic exclusion, dispossession and the treatment they get from their management and Bengali neighbors have rendered them captive laborers."

The Marist Brothers, an international Catholic organization, that is building a high school for the local children, comes to the same conclusion about the living conditions of the tribals. "Neglected, exploited and alienated, most of the workers of the tea plantations live an inhuman life," the organization writes.

But the tea estate owners say that the tribals are better off than most other Bangladeshis.

"Compare us to the standard of living of the average villager, who's a landless peasant. Or the garment factory girl who lives in a slum, gets her minimum wage and leaves after a solid shift of eight hours. Whether she lives or dies, or is raped on the way home, is nobody's bloody headache," Ardashir Kabir, owner of the Sathgao Tea Estate, told the Baltimore Post-Examiner. "But not in our case. Our managers are more like their fathers and mothers. We protect them from outsiders. Our workers live on the estate and consider that their eternal home."