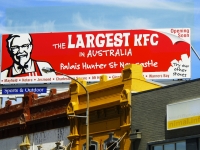 Baiada, one of Australia's biggest poultry producers, has been accused of using labor contractors that under pay and exploit foreign visitors on temporary work permits. The company sells Steggles and Lilydale Free Range Chickens to supermarket and fast food chains like Aldi, Coles, KFC and Woolworths.

Australia has a temporary "working holiday" visa system designed to help young people from 19 different countries subsidize up to a year of travel in Australia. Today unscrupulous employers have taken advantage of this so-called "subclass 417" visa system to employ an estimated 150,000 low wage migrant workers from Hong Kong, Japan and Taiwan as well as from Europe.

"They are lured into a (travel) agency. The agency, for a cost, sets up the trip. They set up the accommodation when they get here. And they set them up with work when they get here on the promise that all is going to be well," Tony Snelson, National Union of Workers, told Four Corners, an investigative program on Australian Broadcasting Corporation television.

"It's not an Australia that we would put on the tourism brochures," Joanna Howe, a senior lecturer at the University of Adelaide law school told the TV station. "There's a whole lot of working holiday makers performing low-skilled jobs - dirty, demeaning, difficult jobs - for which they get paid very little."

"(Our food should) say "Picked and packed by exploited labor," adds Snelson.

Four Corners followed two Taiwanese visitors who were employed by a labor contractor named KC Fresh Choice to work in a Baiada chicken factory in Adelaide. The two workers said that they had to work 18 hours per day, seven days a week, and at a punishing pace. Workers were required to process up to 47 chickens a minute, and rarely permitted to take breaks for water or to go to the toilet.

The company says that it will look into the allegations. "Baiada can confirm it has instigated a review into the issues raised by the program," the company said in a press statement. "Baiada is committed to the fair treatment of employees as well as any labour hire and contractor employee that works in the supply chain. We confirm that any mistreatment of workers or denial of their proper entitlements is a serious breach of Baiada's policies and contractual terms and will not be tolerated."

Yet, this is not the first time that Baiada has been accused of using contract workers who were making less than the legal wage. In 2010, another labor contractor named General Services Company was told to pay $5,000 in back wages to a group of Chinese workers at the Baiada's Beresford factory, 100 miles north of Sydney. And in 2013, Lateline, another ABC television program, uncovered a company called Pham Poultry that was supplying workers to Baiada's Beresford plant at half the minimum wage.

By contrast, Baiada is privately owned by the Camilleri family who are worth approximately $500 million.

Local farmers say that the government needs to crack down on rogue employers.

"I think the only way to clean this out, is there has to be legislation put in place by the federal government in regards to licensing these contractors to give some credibility.," Peter Darley from New South Wales Farmers, an advocacy group, told ABC Television. "That'll move out some of the ones who are trading with the wind in regards to how they operate."