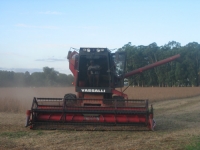 Hedge fund billionaire George Soros made a fortune betting against the British pound in 1992 and was accused of doing the same against the Thai baht and the Malaysian ringitt in 1997. Today Soros is making a killing buying and selling farmland in South America after converting them to biofuel production. While this has caused the land prices to increase dramatically, the ecological impact is questionable.

Soros has a 21 percent stake in a company named Adecoagro that is worth some $236 million. (Share prices in the company are down substantially to $9.36 from the high of $13.50 in February 2011 although they are well up on the low of $7.44 in October of the same year)

Adecoagro, an agribusiness company based in Brazil, was created in 2002 to invest in biofuels, coffee, cotton, dairy, grain and sugar production in Argentina, Brazil and Uruguay. Over the last decade, the company has amassed 283,000 hectares in land which it is now slowly selling off as the price of the land rises. All told the company has now made $132 million from selling farmland and calculates that it has made over 30 percent a year for its investors.

For example, last month that Adecoagro sold a farm for some 11 times the price that it acquired it for in 2002, according to Agrimoney: A 51 percent share in the company that controls the Santa Regina farm in Buenos Aires province was sold for $13 million by Adecoagro with an option for the unknown purchaser to buy the rest of the company by next June.

Likewise, last August Adecoagro sold its San Jose farm in Sante Fe, Argentina, for $1,212 per hectare, a 14 fold gain over the $85 it paid per hectare in 2002. The company claims that the value of the land has risen as a result of better management of the San Jose farm. "Agecoagro implemented a sustainable production model that allowed it to grow row crops over six percent of the farm and to increase the productivity of the pastures used for cattle grazing," it said in a statement.

The company also points to the sale of La Alegria - a cattle farm located in General Villegas in the province of Buenos Aires - that it bought in 2007 for $5.9 million. Four years later the company sold the farm for $13.7 million after converting it to the "sustainable" production of soybean, corn and wheat using "no-till farming, crop rotation, balanced fertilization and other best practices."

The question remains: was this the only reason the value increased? Well, it appears that the conversion of cattle ranches into soybean farms has also helped increase prices because of the skyrocketing demand for the crop for the purpose of producing biofuels.

The planting of soy - together with palm and jatropha - has boomed around the world in the last decade because of generous subsidies from governments in Europe and North America who want industry to reduce their dependence on fossil fuels like coal and petroleum in order to meet international obligations to mitigate global warming under the Climate Change convention.

But the environmental gains from soy production are questionable. Tim Searchinger, a former Environmental Defense lawyer, authored a 2008 paper for a workshop organized by the Farm Foundation and the U.S. Department of Agriculture that showed that converting cropland to soy biodiesel production created "dramatically" more global warming than burning regular fuels.

"Prior analyses made an accounting error," Searchinger told Scientific American. "There is a huge imbalance between the carbon lost by plowing up a hectare of forest or grassland from the benefit you get from biofuels."

Activist groups like Oxfam are also critical of the impact of the biofuel rush which they say is pushing subsistence farmers off their land. "(L)and deals driven by biofuel production mean that there is less land available to grow local staples, fruit and vegetables, making it difficult for parents to provide their children with healthy, nutritious meals," writes the UK NGO in "Hunger Grains" published in September 2012.

There is one factor that has slowed Adecoagro speculation in Argentine land, however. This occurred in December 2011 when the Argentine Senate voted 62-1 to approve a law capping ownership by a foreign individual or company at 1,000 hectares (2,470 acres) in a bid to curb the loss of land to outsiders.