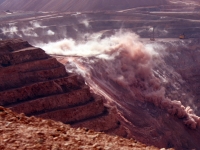 Some 4,000 contract workers at Los Bronces copper mine in Chile went on strike against Anglo American, a UK-based mining multinational from South Africa. The strike is the latest in a series of protests against the Chilean copper industry, the world's largest producers of the metal.

Copper is Chile's most important product. One fifth of Chile's gross domestic product is derived from copper and the metal makes up 60 percent of exports. As much as a third of global production of copper comes from Chile with the bulk shipped to China for manufacturing. (Copper is also extremely valuable in China, so much so that it is often used as a backing for bank loans)

Over the last few decades Chile's mining industry has slowly outsourced most jobs with as many as two out of three workers now working on short term contracts at salaries as low as one third of those with full time staff jobs. Chile's contract workers are also often assigned more dangerous jobs with higher risks of injury, say researchers. "These disparities have had a great deal of impact on relations between families and children of first, second and third class workers, destroying family ties and the social fabric of mining towns and regions," write Fernando Duran-Palma and Diego Lopez in a 2008 paper.

Last August some 2,500 workers went on strike at the Escondida copper mine, the the world's biggest copper mine, operated by BHP Billiton from Australia, the third such major strike at the mine in the last decade. Previous stoppages occurred in 2006 and 2011, with the first one lasting a whole month.

State-owned Corporacion Nacional del Cobre (better known as Codelco) the world's largest copper producer, has also been hit by multiple strikes in the last few years. All of the companies operations were shut down by a July 2011 strike in protest against privatization plans followed by another strike last April to protest low health and pension benefits. Workers at the Salvador mine, one of the smaller Codelco operations, also downed tools last September.

The copper industry in Chile have also been affected by other labor protests. Port workers went on strike in July 2011 and again April in 2013 and January 2014, shutting down key ore export ports like Antofagasta and Iquique forcing mining companies to postpone shipments for several days.

Related mineral producers have also been affected. Earlier this month workers at the Maricunga gold mine in Chile went on strike after failing to reach a new collective agreement with Kinross, the Canadian company that operates the mine.

While unions have managed to negotiate settlements at many of the previous strikes, anger among the contract workers boiled over at the Los Bronces site high in the Andes in central Chile on Monday. "There have been fires, looting, vehicle thefts and disturbances," the company claimed in a statement.

"The violence is very concerning," Juan Carlos Guajardo, the head of mining think tank CESCO told Reuters news agency. "It's generating more and more complications in Chilean mining ... I think we could see more cases like these."

But union organizers say that the fault lies with the industry. "We must also look at the brutal violence in over-exploiting workers," Manuel Ahumada, president of the CTC umbrella union, told the wire service. "Violence is also generated with fear, over-exploitation and precarious situations."