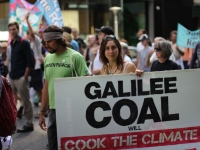 Adani Enterprises has been offered a $1 billion loan by the State Bank of India to support a mega coal mining project in the Galilee basin in central Queensland, Australia. Environmentalists say that the accompanying industrialization is likely to severely impact the Great Barrier Reef, 400 kilometres away.

Some 60 million tonnes of coal are expected to be extracted every year from the $16.5 billion Carmichael project which would include five underground mines and six open cut pits that would sprawl over an area of 200 square kilometres. A new railway line is planned to allow the coal to be taken to a port at Abbot Point from where it would be exported mostly to India.

Carmichael was given the go-ahead this past July by Greg Hunt, Australian environment minister for the conservative government of Tony Abbott, despite fierce opposition from environmental activists who say that the massive expansion of port facilities and shipping activity will spell disaster for the environmentally sensitive Great Barrier Reef that lies along the export route.

"We have an approval based on the word of Adani that they know where to get offset habitat, so they are able to destroy valuable habitat without securing a replacement. There are species that will suffer a very uncertain future because of this," Adam Walters, spokesman for Greenpeace, told Guardian Australia. "The monitoring of water has been found to be inadequate by an independent body but rather than force Adani to assess it properly, the government has given it the green light."

Adani Enterprises is owned by Gautam Adani, a billionaire businessman with close ties to the right wing Indian government of Narendra Modi. His company also owns the 4,620 megawatt Mundra thermal plan in Kutch, India, which is fueled with coal imported from Indonesia. That project has been the subject of a complaint to the World Bank over the devastation it has caused to the local fishing community.

A 2013 report from the Indian Ministry of Environment and Forests concluded that Adani played fast and loose with the rules. Adani attempted to "bypass the statutory procedures" to obtain clearances for the project, destroyed mangrove ecosystems, blocked local creeks and improperly disposed of fly ash.

"History will look back on the Abbott government's decision ... as an act of climate criminality," Larissa Waters, a senator from the Australian Green party, said in a press statement. "Adani has a track record of non-compliance with environmental conditions in India - why take the risk with our climate and Great Barrier Reef?"

The State Bank loan announcement was made to coincide with a visit of the Indian prime minister to Australia. The decision was promptly attacked in India, where Derek O'Brien, an opposition politician labeled the decision as "crony capitalism" citing Adani's close ties to the Modi administration.

The decision comes soon just weeks after five major international banks - Barclays, Citibank, Deutsche Bank, HSBC and Royal Bank of Scotland - refused to back the project because of its environmental impact, according to statements gathered by Rainforest Action Network.

With the Australian government go-ahead for Carmichael and the State Bank of India loan in the pipeline, approval for the expansion of the Abbott Point port (also owned by Adani) is now expected before the end of the year, according to media reports, which has further angered environmentalists.

"It appears the (Australian) government wants to give Adani a Christmas present of a brand new coal port, without the level of scrutiny that such a huge and risky development should have," says Felicity Wishart, Great Barrier Reef campaign director for the Australian Marine Conservation Society. "Is the government allowing the mining industry to call the shots on how we manage the Great Barrier Reef?"

However, Carmicheal is still not a sure thing, if only because financial analysts say that the profitability of the project is dubious at best. "The maths look challenging," Thomas Jacquot, a Standard & Poor's credit analyst, told the Sydney Morning Herald. "I'm ultimately very curious because the coal market is very depressed."