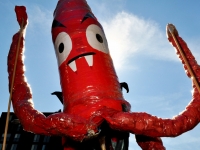 In U.S. sports jargon, a "huddle" is the term used to describe players gathering in a tight circle to plan game strategy. When the Securities and Exchange Commission (SEC) discovered that Goldman Sachs researchers had weekly "huddles" with investment bankers and traders to provide them with stock tips, however, they called foul.

"From 2006 to 2011, Goldman held weekly huddles sometimes attended by sales personnel in which analysts discussed their top short-term trading ideas and traders discussed their views on the markets," said the SEC in a press release issued earlier this week. "In 2007, Goldman began a program known as the Asymmetric Service Initiative (ASI) in which analysts shared information and trading ideas from the huddles with select clients."

Insider trading - as we have noted before - is the practice of cashing in on information that is not known to the general public. Although it is not illegal in many other countries, the U.S. takes it very seriously and will jail violators and sometimes ban them from trading. Bigger companies - like Goldman Sachs - will typically pay out large sums in order to avoid such punishment.

This is not the first time that Goldman Sachs has been accused of insider trading. In 2003, the investment bank paid out $110 million as part of a $1.4 billion settlement with the New York state attorney general Eliot Spitzer to resolve claims of conflicts of interest. Business Week magazine's Robert Kuttner described it thus: "(R)esearch analysts" were acting as stock touts for the firms' investment banking business instead of providing objective, independent analysis to investors."

Three years later, it appears that the company was doing much the same thing. In 2009, the Wall Street Journal uncovered evidence: Susanne Craig published an article in which she gave specific example of a Goldman analyst named Marc Irizarry who rated mutual-fund manager Janus Capital Group Inc. as a "neutral" in early April 2008. Later that month, at an internal huddle, Irizarry said that he expected Janus to climb. The following day Goldman staff called some 50 preferred clients like Citadel Investment Group and SAC Capital Advisors, both hedge fund groups, to give them the tip. Less powerful clients had to wait six days for Irizarry's bullish report, by which time the stock had already gained 5.8 percent.

In June 2011, Goldman Sachs paid state regulators in Massachusetts a $10 million fine to resolve the allegations of huddles. "We verified that there was a preference of some customers at the expense of others," William F. Galvin, the state's chief financial regulator, told the New York Times.

More details followed: An internal e-mail, written in November 2008, noted that over half of 115 accounts that were contacted by Goldman Sachs staff reported an increase in revenue. "The commercial value of these calls in the form of more revenue to GS ... (is) substantial," the complaint recorded one business manager saying. "In general we have seen about a 50 percent rise in revenue."

This week's settlement with the SEC requires Goldman Sachs to pay a fine of $22 million. "Despite being on notice from the SEC about the importance of (higher-order) controls, Goldman failed to implement policies and procedures that adequately controlled the risk that research analysts could preview upcoming ratings changes with select traders and clients," said Robert S. Khuzami, the SEC's enforcement director in a press release.

Goldman issued a statement saying that it "neither admitted or denied the charges."

Given this history, it is hardly a surprise that Goldman Sach's business model was recently caricatured by Matt Taibbi in Rolling Stone thus: "The world's most powerful investment bank is a great vampire squid wrapped around the face of humanity, relentlessly jamming its blood funnel into anything that smells like money."