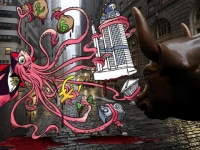 Greg Smith, a Goldman Sachs employee in London, has quit the company with a fiercely critical op-ed in the New York Times in which he accuses the Wall Street investment bank of losing its moral compass.

"It makes me ill how callously people talk about ripping their clients off. Over the last 12 months I have seen five different managing directors refer to their own clients as "muppets," sometimes over internal e-mail," Smith wrote.

The financial world is in an uproar over the incident. Some have praised his candor like Iain Martin in the Daily Telegraph: "It is refreshing when we rediscover that a knee in the nuts, in the form of an op-ed in a newspaper, can still have a serious impact."

The Wall Street Journal has reacted with disdain: "A person familiar with the matter said Mr. Smith's role is actually vice president, a relatively junior position held by thousands of Goldman employees around the world. And Mr. Smith is the only employee in the derivatives business that he heads, this person said."

Readers of the Guardian say that his description of Wall Street should be no surprise: "I think this is the kind of revelation that would come as a complete shock out of the blue to the kind of people who believe in the Tooth Fairy."

Many have mocked Smith. Blogger Deadspin says Smith was "trolling for a new job!" under a headline "Bronze Medal Ping Pong God Bravely Resigns From Goldman Sachs" noting "I like how he got the Stanford mention in right off the bat. Smith goes on to list his accomplishments at the firm: "I was selected as one of 10 people (out of a firm of more than 30,000) to appear on our recruiting video." "I managed the summer intern program in sales and trading." " My clients have a total asset base of more than a trillion dollars."

The Daily Mash has done a very funny re-write, titled: "Why I am leaving the Empire, by Darth Vader," in which they advise Goldman Sachs to "Make killing people in terrifying and unstoppable ways the focal point of your business again. Without it you will not exist. Weed out the morally bankrupt people, no matter how much non-existant Alderaan real estate they sell. And get the culture right again, so people want to make millions of voices cry out in terror before being suddenly silenced."

Smith himself paid homage to previous criticisms of Goldman, citing Matt Taibbi's Rolling Stone feature of the company in which Taibbi described the company thus: "The world's most powerful investment bank is a great vampire squid wrapped around the face of humanity, relentlessly jamming its blood funnel into anything that smells like money."

But honestly, is anyone really surprised that people at Goldman Sachs try to make as much money for themselves as they can? And can the vampire squid grow another tentacle to replace Greg Smith?

Real criticism of Goldman Sachs would delve into how they have ripped off the taxpayer and ordinary workers, and ruined the global economy. For that, once again, go read Matt Taibbi's article in which he lays out the real story.

Here's the short version from Taibbi:

"(Goldman)'s unprecedented reach and power have enabled it to turn all of America into a giant pump-and-dump scam, manipulating whole economic sectors for years at a time, moving the dice game as this or that market collapses, and all the time gorging itself on the unseen costs that are breaking families everywhere - high gas prices, rising consumer credit rates, half-eaten pension funds, mass layoffs, future taxes to pay off bailouts ... The bank is a huge, highly sophisticated engine for converting the useful, deployed wealth of society into the least useful, most wasteful and insoluble substance on Earth - pure profit for rich individuals."