U.S. Sues Bank of America for $1 Billion in Bad Mortgages 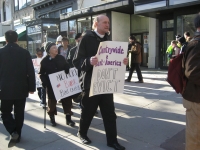 Fannie Mae and Freddie Mac guarantee payments of principal and interest to investors on loans that default, in order to create supposedly low-risk investment options that fuel investment in the housing market.

In early 2007 the market for subprime loans - loans offered to individuals considered high risk for default or who have bad credit - collapsed. (see Center for Public Integrity feature on the top subprime lenders and the banks behind this collapse) Fannie Mae and Freddie Mac began tightening their requirements on purchasing riskier loans.

Countrywide, the largest housing mortgage and subprime lender in the U.S. at the time, switched over to issuing prime loans instead. Unlike Fannie Mae and Freddie Mac, it compensated for the lack of eligible borrowers by lowering its standards.

In August 2007 Countrywide initiated a program called the "High-Speed Swim Lane" (nicknamed the "Hustle") that was "intentionally designed to process loans at high speed and without quality checkpoints," the lawsuit stated. (Most of the government information on this internal scheme came from Edward O'Donnell, a whistleblower)

Under the Hustle, verification of documentation and income were removed from the process of approval for all but the riskiest of loans, higher-level positions overseeing and reviewing loans were eliminated in order to expedite the largely automated application process.

In fact Countrywide did not even disclose the existence of Hustle to the buyers of its loans, prosecutors said. Subsequently nearly one-third of all single-family residence mortgages Fannie Mae bought in 2007 came from Countrywide.

"Countrywide and Bank of America systematically removed every check in favor of its own balance - they cast aside underwriters, eliminated quality controls, incentivized unqualified personnel to cut corners, and concealed the resulting defects. These toxic products were then sold to the government sponsored enterprises as good loans."

In one example cited in the suit, a borrower claimed to be self-employed and earn $8,500 a month working at a company that didn't exist. The property in question was "grossly inflated" by 31 percent, and the documentation on file was inadequate, the lawsuit said. Despite the fact that such a loan would not meet the standards set by the federal mortgage finance firms for resale, Countrywide misrepresented the case to Fannie Mae, who then bought it. The loan defaulted within ten months.

One reason for the large number of such loans was that Countrywide offered junior employees bonuses based on the volume of loans they could make. That led to numerous situations where employees changed numbers in the computerized system, the prosecutors alleged.

In January 2008, Countrywide, which had not yet merged with Bank of America, conducted an internal review that found more than half of its Hustle loans were failing. But "rather than alter or abandon the Hustle model," the lawsuit said, Countrywide "prohibited [its former executive vice president and whistleblower] Edward O'Donnell's team from circulating the quality reports."

"After the merger, the Hustle continued unabated through 2009. At no time did Bank of America take any steps to disclose the Hustle to Fannie Mae or Freddie Mac," the suit stated. "Throughout the Hustle, Countrywide and Bank of America sold thousands of Hustle loans to [Fannie Mae and Freddie Mac] that they knew did not meet their representations and warranties of quality."

When the housing market collapsed later that year and borrowers defaulted en masse on mortgage payments, Fannie Mae and Freddie Mac had to be bailed out by the federal government at the tune of $188 billion in taxpayer money. Both mortgage financiers have been under conservatorship of the U.S. Treasury since September 2008 and have only paid back a fourth of that sum to date.

During the last two years Fannie Mae and Freddie Mac have demanded that Bank of America buy back $12 billion of the defaulted loans that it alleges were illegal. The lawsuit claims that "after the loans defaulted, Bank of America has resisted buying many of them back, despite the presence of fraud, misrepresentation, and other obvious violations."

"The claim that we have failed to repurchase loans from Fannie Mae is simply false," Bank of America said in a public statement. "At some point, Bank of America can't be expected to compensate every entity that claims losses that actually were caused by the economic downturn."

The lawsuit seeks maximum damages of over  $1 billion but could be awarded three times the amount of damages if the government can prove that taxpayers were cheated, under the False Claims Act.

This is the first lawsuit brought by the Department of Justice concerning mortgage loans sold to the now-nationalized Fannie Mae and Freddie Mac buys residence mortgage loans from private lenders, insures and resells them on the open market.

However Bharara's office has brought five other lawsuits against major U.S. banks for "reckless mortgage practices in the lead-up to the financial crisis" in the last 16 months. In February, Citigroup settled such a case for $158.3 million and Flagstar Bancorp Inc settled for $132.8 million. Deutsche Bank AG settled in May for $202.3 million. Cases are pending against Wells Fargo and Allied Home Mortgage.

"This lawsuit should send another clear message that reckless lending practices will not be tolerated," Bharara said.