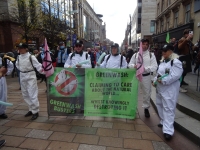 At stake is the definition of what constitutes high ratings for 'environmental, social, and corporate governance' (ESG) funds which is not defined in U.S. law.

For example Goldman used to have a portfolio named the Blue Chip Fund whose top holdings were Apple, Google and Microsoft - not exactly what most environmentalists would label "green." The value of the portfolio doubled between November 2009 and December 2021. Goldman changed the name from Blue Chip Fund to the U.S. Equity ESG Fund in June 2020 without altering the composition of the stocks, according to the Wall Street Journal. (ESG funds can typically charge much higher fees for management.)

Deutsche Bank came under scrutiny when Desiree Fixler, sustainability chief of DWS Group, the bank's asset-management arm, alleged that the bank was misleading investors. "Last year you presented in your annual report that the majority of your assets under management over €450 billion of assets comply with ESG," she would recall that she told the bank’s board in February 2021, in an interview with the Financial Times recently. “Unfortunately, I had to inform them that just simply is not true.” Shortly after that, she was fired.

Fixler blew the whistle in August 2021 triggering an SEC investigation. Then in late May this year, 50 government investigators raided DWS' offices in Frankfurt, Germany to look for evidence on greenwashing. A week later, Asoka Woehrmann, DWS CEO resigned.

Meanwhile the Bank of New York Mellon was slapped with a $1.5 million fine in late May over claims at six ESG funds. “Our order finds that BNY Mellon Investment Adviser did not always perform the ESG quality review that it disclosed using as part of its investment selection process for certain mutual funds it advised," said Sanjay Wadhwa, head of the SEC's Climate and ESG Task Force in a press release.

Industry experts expect that more names will be added to the list of investment firms accused of greenwashing in coming months. “I don’t think anything is off-limits,” Howard Suskin, a partner at the law firm of Jenner & Block, told Investment News magazine. “The bottom line is the SEC, just knowing how popular ESG is among investors, is really now looking carefully at any potential misrepresentations by issuers, by financial institutions and by funds about how they’re talking about ESG, and making sure those are accurate."

Financial managers around the world control about $100 trillion in funds, which are projected to grow to $140 trillion by 2025. Estimates of how much of that money are ESG-rated vary wildly but recent projections suggest that one in three dollars will be covered by such ratings in the next three years. The biggest investors in this business are some of Wall Street's most well known names. Goldman Sachs says that it holds $145 billion in ESG assets while BlackRock investment advisors say that they have over $500 billion in ESG assets. (BlackRock is the world’s largest investment firm with $10 trillion under management.

Ironically one of the men who helped set up BlackRock's huge portfolio has since denounced the investor. “In essence, Wall Street is greenwashing the economic system and, in the process, creating a deadly distraction," wrote Tariq Fancy, the former chief investment officer for sustainable investing at BlackRock in an opinion article penned for USA Today. "I should know; I was at the heart of it."

Indeed, the head of MCSI, one of the biggest ESG ratings companies, boasts that their system is intended to avoid regulation. “By the way we’re doing this to protect capitalism," he told CNBC radio. "Otherwise, government intervention is going to come, socialist ideas are going to come.”

A Bloomberg investigation recently found that MCSI had raised the ESG rating of McDonald’s hamburger chain, despite the fact the company’s greenhouse gas emissions had increased in the last four years. “This issue does not present significant risks or opportunities to the company and with the assigned weight of 0 percent does not contribute to the overall ESG rating,” an MSCI report noted.