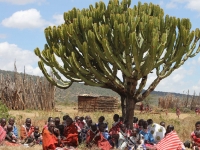 Thomson Safaris, a Massachusetts company that runs the luxury Enashiva tourist camp near the Serengeti wildlife park in Tanzania, has been sued over 10,000 acres of land that the company allegedly acquired illegally from Maasai tribes.

Title to the 10,000 acre parcel of land known as Sukenya Farm was originally given to Tanzania Breweries Limited (TBL) in 1984. For two decades, TBL only used a fraction of the land, leaving the Maasai to continue their ancestral traditions of grazing cattle without hindrance.

In 2006, Thomson says it bought the land from TBL "in an open bidding process" and that it has since collaborated closely with the council of the neighboring village of Soit Sambu to create a "model for community development, conservation, and responsible tourism." The land was named Enashiva (which is the Maasai word for 'happiness') was turned into a private nature reserve to house tourists who pay $5,000 and up for short visits to Tanzania.

But local villagers say that land in question has always belonged to the communities of Mondorosi, Soitsambu, and Sukenya. "The land Thomson took is crucial for our people," says Daniel Ngoitiko, elected councilor of Soitsambu ward. "The water on that land is a precious resource that our cattle need to survive, and our families need to grow crops."

"A company can claim to be eco-friendly or socially conscious," said Marissa Vahlsing, a staff attorney at Earth Rights International. "But if it fails to gain the consent of the indigenous communities that have traditionally lived on and cared for the land, its customers may be participating in the creation of 'conservation refugees' instead of contributing to sustainable development."

Since Enashiva was set up, the Maasai have no longer been welcome on the land, say activists. "Thomson Safaris' guards, sometimes reinforced by the police, started harassing herders to keep them off the land," writes Susanna Nordlund, a blogger. "In one confrontation herder Lesingo ole Nanyoi got shot in the jaw by either the police or guards from the safari company."

In 2010, the Maasai sued TBL and Thomson in Tanzanian courts to regain access to their land. The case was dismissed in August of that year but will be heard in an appeal court later this year. This Febuary Earth Rights International, a legal NGO in Washington DC, brought a lawsuit in U.S. federal court in Boston to force Rick Thomson and Judi Wineland, the owners of Thomson Safari, to turn over the details of the land sale, under a U.S. law that allows plaintiffs in a foreign lawsuit to collect information from individuals or companies in the U.S.

Thomson is not the only safari group to be accused of displacing the Maasai. Ortello Business Corporation from the United Arab Emirates attempted to seal a deal that would have displaced 48,000 indigenous Maasai and opened up the Serengeti for hunting of lions and leopards. Almost 1.8 million people signed a protest letter created by campaigning group Avaaz.

"The Serengeti has become the world's biggest zoo, in which the Maasai warriors are reduced to decorative walk-on parts," wrote New Scientist journalist Fred Pearce in his new book, The Land Grabbers. "(O)ur vision of virgin nature has encouraged the takeover of the land by a new breed of super-rich conservationists and tourism operators."