Thanks But No Thanks: Insurance Company Considers Suing Uncle Sam After Rescue 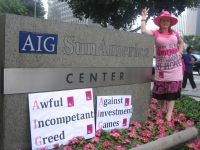 The video advertisement launched just before Christmas was stirring - a montage of devastated communities from Joplin, Missouri to New York city after Hurricane Sandy. Insurance officers of every race from the American Insurance Group (AIG), the world's largest insurance company, conveyed a simple message that they were back in business helping communities recover.

It's a remarkable turnaround for the company which received a massive $182 billion bailout from the U.S. government in September 2008 after facing certain collapse when it became obvious that the risky mortgages that it had insured were likely to fail. At the time the federal government took a 80 percent ownership stake in the company in return for the loan.

"We've repaid every dollar America lent us. Everything plus a profit of more than $22 billion," intone the AIG officials in the video. It ends with the words: "Now let's bring on tomorrow."

Well, tomorrow is here, and now the board of directors of AIG have been asked to consider suing the federal government over the terms of the bailout.

The lawsuit against the government is not new. It was originally filed in 2011 on behalf of AIG's shareholders by AIG's former CEO and chairman, 87-year-old Maurice "Hank" Greenberg. The plaintiffs allege that the U.S. government deprived AIG shareholders of tens of billions of dollars by charging the company an interest rate of 14 percent on the bailout loan. The basis of the claim is that other bank were bailed out on more favorable terms than the insurance giant received. It asks for $25 billion to compensate AIG and its shareholders.

Until now AIG's board has been silent about whether they would join the lawsuit but earlier this week, the board of directors of AIG held an unusual private mock-trial-like session about the matter, in which they heard from attorneys, representatives from the U.S. Treasury and the Federal Reserve.

What the AIG board was asked to decide was whether or not they would like to join the lawsuit, take it over and pursue the claims independently, or if they would try to stop Greenberg's lawyers from pursuing the case on the company's behalf. If they tried to prevent Greenberg from continuing with the suit, AIG would potentially lose out on any lucrative potential settlement.

After the board meeting was reported Monday night, the backlash from legislators, regulators and the financial press was swift and scathing.

"Don't even think about it," wrote Peter Welch, a Congressman from Vermont, in a letter to Robert S. Miller, AIG's chairman: "AIG became the poster company for Wall Street greed, fiscal mismanagement, and executive bonuses-the taxpayer and economy be damned. Now, AIG apparently seeks to become the poster company for corporate ingratitude and chutzpah."

The lawsuit also accuses the government of violating the fifth amendment to the U.S. constitution which prohibits "taking private property for public use without just compensation" when it took the majority of the company's shares in return for the loan.

(Greenberg, it should be noted, was forced to resign in 2005 after being accused of misrepresenting the company's finances.)

"There is no merit to these allegations," said Jack Gutt, spokesman for the Federal Reserve Bank of New York in response to the news of the AIG's board discussion. "A.I.G.'s board of directors had an alternative choice to borrowing from the Federal Reserve, and that choice was bankruptcy," he told the New York Times.

The terms of the other bailouts were different, says commentators, because AIG was not a bank. "Those institutions were either banks that were already closely regulated by the Fed or became bank holding companies and submitted themselves to Federal Reserve regulation in return for access to the Fed's lending facilities," Time magazine reported.

Others note that AIG got a really good deal for the price, give the size and the nature of the loan. "Warren Buffett
loaned Goldman Sachs $5 billion at 10 percent annual
interest, plus upside in the form of warrants," writes Daniel Indiviglio of Reuters. "He ended up
booking an annual return of 14 percent without exercising the
warrants - far better than the government has managed from AIG
on the same basis." (The government ended up with about four percent in interest a year.)

Federal regulators also stress that the massive bail out of AIG was necessary because AIG was selling credit-default swaps that were intended to protect against subprime mortgage default - a major cause of the 2008-2009 financial crisis. If the insurance company had collapsed, the other banks and financial systems that it has insured would have gone down with it also.

"(W)e have no choice but to stabilize, or else risk enormous impact, not just in the financial system, but on the whole U.S. economy," Ben Bernanke, the chairman of the U.S. Federal Reserve, told CBS television in 2009.

On Wednesday the AIG board decided not to join the lawsuit. "The majority of directors decided that the reputational damage was greater than the possibility on a long-shot lawsuit," John Coffee, a professor at Columbia Law School, told the Washington Post.

Now Greenberg, whose lawsuit was initially thrown out of the courts in November 2012, will have to proceed without the insurance giant's backing to an appeal court, which has agreed to review the case.