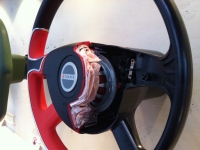 Takata, the Japanese auto parts maker, will pay a $1 billion fine to the U.S. government after pleading guilty to hiding information about the likelihood that the company’s car air bags could accidentally explode. Takata air bags have been linked to at least 17 deaths around the world.

Air bags use chemicals that are designed to help them inflate quickly in the event of sudden impact to cushion passengers from serious injuries or death. In 1991 the U.S. government passed a law requiring car makers to install air bags in all new vehicles made after 1998.

Initially many air bag manufacturers used chemicals like guanidine nitrate and tetrazole to help inflate air bags. Takata, which was a small player in the market in the 1990s, discovered that it could replace tetrazole with ammonium nitrate, a much cheaper chemical. Unfortunately, ammonium nitrate is an unstable chemical that has a tendency to explode in high humidity climates, causing the air bags to burst and spray metal shrapnel.

"Everybody went down a certain road, and only Takata went down another road," Jochen Siebert, managing director of JSC Automotive Consulting, told Bloomberg. Their rivals, like Autoliv of Sweden, refused to switch. "The gas is generated so fast, it blows the inflater to bits," Robert Taylor, Autoliv’s head chemist told the New York Times.

But when Takata offered car manufacturers the cheaper bags, many agreed to switch to save money. Over the next few years, Takata did a booming business, supplying air bags to brands like Acura, BMW, Chrysler, Ford, General Motors, Honda, Isuzu, Mazda, Mitsubishi, Nissan, Subaru and Toyota.

Initially Honda was seen at fault and the company issued a recall of 4,205 cars. As deaths and injuries continued to mount, the company expanded its recall eight times. Meanwhile Takata and the car companies quietly agreed to pay millions to settle individual death and injury cases out of court.

U.S. regulators opened an investigation into Takata in 2009 and subsequently closed it a few months later, under the mistaken impression that the explosions were the result of manufacturing errors at the Takata plant in Moses Lake in Washington state.

It was not until April 2013 that Takata finally announced that their air bags were at fault. The following year Mark Lillie, a former Takata employee, blew the whistle to say that the company had known about the problem since at least 2000. "Never any evidence, never any test results, never any test reports, nothing to substantiate they had overcome the phase stability problem," Lillie said in a testimony before the U.S. Congress. "I literally said that if we go forward with this, somebody will be killed," he told Bloomberg later.

"Automotive suppliers who sell products that are supposed to protect consumers from injury or death must put safety ahead of profits," Barbara McQuade, U.S. attorney for Eastern District of Michigan said in a press release after announcing the $1 billion settlement last week. "If they choose instead to engage in fraud, we must hold accountable the individuals and business entities who are responsible."

"Takata deeply regrets the circumstances that have led to this situation," Shigehisa Takada, the CEO and chairman of Takata said in a statement released at the same time.

The U.S. government has indicted three Takata employees in Japan for their knowledge of the defects: Tsuneo Chikaraishi, Hideo Nakajima and Shinichi Tanaka. Documents released by the government state that Nakajima told his colleagues in a 2004 email that they had no choice but to rig data, urging them "to cross the bridge together." Chikaraishi was chief of airbag inflater operations for Japan and Asia and Tanaka was the company’s chief director of procurement.

Critics say that the government failed to do its regulatory job. "My take is that if NHTSA had done the right thing and really probed Takata, they could have caught it a lot sooner and we wouldn’t have the crisis we have today," Clarence Ditlow, the director of the Center for Auto Safety, a Washington DC based NGO, told Bloomberg. "Takata made one of the most colossal blunders in the history of the industry."

Part of the problem is that the car companies are allowed to police themselves and file their own reports about defective parts, say activists. "We know that regulation itself is not sufficient, because the regulators are underfunded, often too close to industry, and even in the best case scenario can’t be everywhere," Rob Weissmann, the president of Public Citizen, said in a press statement about the Takata case. "The executives responsible for this lethal corporate penny-pinching belong behind bars, both as a matter of justice for the victims and their families, and as a deterrent to executives who show similar disregard for the safety of their customers."

So far the U.S. National Highway Traffic Safety Administration (NHTSA) has issued recall orders for 46 million vehicles that are affected, and another 42 million are expected to be recalled in coming years.

But to this day only eight million of the potentially defective airbags have been replaced because the manufacturers cannot compel owners to come in and repair their vehicles.