Neither Admit Nor Deny: Big Business Allowed To Pay Millions to Avoid Jail 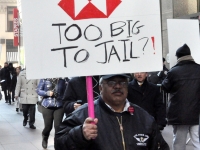 Record fines adding up to $36 billion have been paid out in the last 12 years by multinational corporations to the U.S. government to settle charges of corruption and fraud. But are they getting away with a slap on the wrist to avoid prosecution for major crimes?

Just last month Ralph Lauren, the U.S. fashion chain, paid out $1.6 million in fines to the U.S. Department of Justice and the U.S Securities and Exchange Commission (SEC) to settle allegations that the company had paid bribes to Argentinian officials between 2005 and 2009 to ensure that their products could be imported into the country without required paperwork or being subjected to customs inspections.

"Justice and the Securities and Exchange Commission -- have taken a kid-glove approach to the corporate criminal activity that arguably inflicts far more damage on society than all street crime combined," says Russell Mokhiber, the editor of Corporate Crime Reporter, who organized a conference in Washington DC last week titled "Neither Admit Nor Deny: Corporate Crime in the Age of Deferred Prosecutions, Consent Decrees, Whistleblowers & Monitors."

Over the last decade or so two types of deals - non prosecution agreements (NPAs) and deferred prosecution agreements (DPAs) - have become the principal tool for government lawyers at the Justice Department to pursue white collar crime. Meanwhile their colleagues at the SEC's Enforcement Division hand out "consent decrees" which allow companies to "neither admit nor deny" allegations of corruption and fraud.

Typically these arrangements involve a statement of facts agreed together by the corporation and the government, a cash fine, and the appointment of a "probation officer" who monitors the company to make sure that it does not break the law again.

"It allows the government to shift our limited resources to other culpable actors," Denis McInerney, a Deputy Assistant Attorney General for the Criminal Division of the Justice Department told the conference. "They allow the government to obtain virtually everything that you might see if you go through and get a conviction."

But legal experts say that the agreements allow corporations to buy their way out of almost anything. "DPAs and NPA's are like the tree limbs and rubbish that prevent the water going over a dam," Mike Koehler, a professor at the Southern Illinois School of Law, told the conference. "DOJ has championed an alternative reality that has become problematic: it sends the message that justice can be bought."

The practice received of corporate defendants being allowed to neither admit nor deny allegations received a setback in the courts in December 2011 when Judge Jed Rakoff rejected a $285 million settlement between Citibank and the SEC. "In much of the world, propaganda reigns and truth is confined to secretive, fearful whispers," wrote Rakoff. "The SEC, of all agencies, has a duty, inherent in its mission to see that the truth emerges."

"The Rakoff ruling was a scream of frustration and outrage," said Rob Weissman, executive director of Public Citizen. "There is no accountability whatsoever for the worst financial crisis in 70 years."

Even though the federal government has few plans to take a more aggressive stance in prosecuting corporations, activists attending the conference were hopeful that the quantity and quality of financial fraud cases being investigated will rise in the future, because of a new law that provides major financial incentives to whistleblowers who call the SEC - as much as 30 percent of the money collected.

Sean McKessy, a former Caterpillar executive, was appointed to head up a new SEC whistleblower office in August 2011. The 11 lawyers that staff the office have received over 3,000 tips so far.

The new initiative has generated modest returns in its first 20 months: one whistleblower helped prove that Oppenheimer and Company had inflated the returns on a private equity fund, resulting in a fine of almost $3 million. In addition, a Ponzi scheme created by China Voice Holding Corp was exposed by another whistleblower - Dee Dee Stone - who had been hired to work on the company's taxes.

Two other SEC cases are being investigated with the help of whistleblowers according to the New York Times: Knight Capital which suffered major losses as a result of software glitches and Paradigm Capital Management which allegedly targeted one of its staff James Nordgaard, a hedge fund trader.

More cases are expected to emerge in coming months and years as the financial incentives have spurred a cottage industry of lawyers willing to help the whistleblowers. For example Labaton Sucharow has hired Jordan Thomas, a former SEC official who helped draft the whistleblower law, to launch a guide for potential clients.

Another enterprising lawyer - Stuart Meissner - has even attempted to drum up business by showing advertisements at screenings of the new film: "Wall Street: Money Never Sleeps" in New York movie theaters asking whistleblowers to contact him via his website.