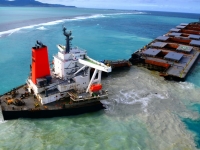 MV Wakashio, a Panamanian-flagged bulk carrier owned by Nagashiki Shipping and chartered by Mitsui OSK Lines, hit a coral reef off the coast of Mauritius in late July. Over the course of the next few weeks, the vessel split in two spilling fuel oil and creating an ecological disaster.

Four separate and ongoing investigations are still trying to unravel exactly what happened to the MV Wakashio and how to determine who has to pay how much for the damage.

This much is known: The vessel was on its way from Singapore to Brazil to pick up cargo when it hit the coral reef. The vessel ran aground in Blue Bay, one of the remaining undamaged coral reefs off the coast of the island that is hometo some 1,700 species, which has been designated a World Heritage Site by the United Nations Educational, Scientific and Cultural Organization (UNESCO). Local environmental groups estimated that roughly 1,000 tonnes of oil leaked and created a black slick in the stunning blue waters of the bay. Experts say the impact could be long standing.

"It is not just about the light oil slick you see on the surface of the water caused by the spill," Dr Corina Ciocan, a senior lecturer in marine biology at the UK's University of Brighton, told the BBC. "There will also be soluble compounds from the oil that will dissolve in the water, a mousse-like layer underneath the surface of the water, and then very heavy residues on the bed - so the entire marine ecosystem will be affected.”

“Something that is also concerning is that we don’t know the possible long-term effects,” Jacqueline Sauzier from the Mauritius Marine Conservation Society told the journal Nature. “The oil is a new low-sulphur fuel oil that is being introduced to reduce air pollution.”

More than 35 dead dolphins have already been washed up on the coast of the island. The oil spill has also affectedhuman health - schools in the surrounding areas had to close temporarily due to the toxicity of the air. A video shared on TOP FM by José Béchard, taken about two months after the initial impact of the vessel, shows a number of dead sea creatures washed up during low tide on a protected coral atoll as far away as 5 miles south-west of the incident.

This ecological crisis has not only put Mauritius’ biodiversity at risk but also threatens the livelihoods of the local population since Mauritius’ economy is strongly dependent on its tourism industry, which is already suffering from the impact of COVID-19 after the government closed national borders from March to October 2020.

The cost of cleaning up the mess is likely to fall to Nagashiki Shipping, the Japanese owner of the vessel, under the BUNKER Convention of 2001 that is administered by the International Maritime Organization (IMO) which stipulates that the owner of the vessel is responsible for any damage caused by oil leaks. In theory based on two treaties regarding marine accidents, Nagashiki may be liable for $1 billion, but perhaps even more if serious faults are found. In addition, further damages may be assessed to pay for the harm caused to wildlife along with the fishing and industry tourism of Mauritius.

There are several other mysteries that the authorities are trying to solve – for example the similarity of the July 2020 MV Wakashio incident to one that occurred in June 2016, in almost the exact same spot. In that incident, the bulk carrier MV Benita, owned by Unit Maritime, ran aground in the south-east coast of Mauritius after a fight occurred onboard the vessel. Few shipping vessels sail closer than 20 miles from the coast of Mauritius but both MV Wakashio and MV Benita came as close as 5 miles from land.

A second mystery is the fact that satellite data showed that the MV Wakashio was traveling at 11 knots - which is standard for a vessel this size at sea; yet, there was no evidence of the crew attempting to slow the ship down before impact. Satellite data obtained by Nishan Degnarain, a contributor to Forbes magazine, from Windward Predictive Maritime Intelligence allegedly shows that the vessel had entered Mauritius’ Exclusive Economic Zone (national waters) two days prior to the incident on July 23rd and that the course was changed to veer off the mainstream shipping lanes in the middle of the night of July 21st at 2am. Degnarain has mounted a campaign to ask how and why the course of MV Wakashio was changed so abruptly without any intervention by the vessel, shipping company or coastguard to prevent the ecological disaster.

A third mystery is the role of the Very Low Sulfur Fuel Oil (VLSFO) that the MV Wakashio was using. This new fuel, a mixture of jet fuel and ship fuel, has been estimated to put approximately six percent of vessels at the risk of engine failure. Ship documents show that the oil found on board exceeded engine safety limits. Mitsui OSK Lines claims they were aware of the excess fuel and has attempted to warn the crew members without avail.

A final mystery revolves around the actual role of Nagashiki Shipping. Sleuthing by Forbes magazine suggests that the Nagashiki may just be a front company – since it is headquartered in a residential home in Okayama Prefecture, Japan.

Mitsui has attempted to address these controversies while carefully deflecting any blame. “The owner of the ship takes primary legal responsibility, but we, as the charterer of the ship, have to bear a social responsibility and take proper measures, as this accident has significantly impacted the environment and people’s life in Mauritius,” Mitsui OSK President Junichiro Ikeda told a news conference in September.

Meanwhile the failure of the government to clean up the mess and get compensation has triggered massive protests against the government. “Government failed to take appropriate decisions to stop the oil spill,” Ashok Subron, one of the organizers of the protests, told Bloomberg News. “People rallied to protect the sea. Wakashio has shown how attached Mauritians are with the sea and why they are angry. We are challenging the regime and its policies.”