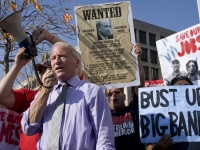 Goldman Sachs, the Wall Street investment bank, is being sued in London for selling Libya "worthless" derivatives trades in 2008 that the country's financial managers did not understand. Libya says it lost approximately $1.2 billion on the deals, while Goldman made $350 million.

What the Libyans did not understand was that if the stocks in these six companies did not rise, their investments would become worthless. Instead the LIA executives were taken in by a trip to Morocco as well as "small gifts, such as aftershaves and chocolates" and an offer of an internship for Mustafa Mohamed Zarti, the brother of the Libyan fund's deputy executive director, in Dubai and London.

"The unique circumstances allowed Goldman Sachs to take advantage of the LIA's extremely limited financial and legal experience to deliberately exploit its position of influence and to take advantage in a way that generated colossal losses for the LIA but substantial profits for Goldman Sachs," said LIA Chairman AbdulMagid Breish in a statement.

The timing of the bets was particularly bad. Since the deals were struck in early 2008, just before the last financial crisis when most share prices tumbled, the Libyans lost their wagers.

"We think the claims are without merit, and will defend them," Fiona Laffan, a Goldman Sachs spokeswoman in London, told Bloomberg news service.

However, the bank recently claimed that it had retrained its staff to ensure that customers are no longer blind sided by sales pitches for complex products. "For all of our employees, the experience of initiating, approving and executing a transaction for a client at Goldman Sachs is now fundamentally different," Goldman claimed at its annual meeting last year.

Goldman Sachs is not the first Wall Street bank to be accused of taking advantage of naive foreign investors. Morgan Stanley was sued for selling bundled sub-prime mortgages to China Development Industrial Bank (CDIB) from Taiwan that they knew would fail. Even Standard & Poors (S&P), Wall Street's top ratings agency, has been accused of helping banks to sell "collateralized debt obligations" that they knew were likely to go sour.

But this is not the first time that Goldman Sachs has been happy to help governments carry out dodgy deals. Back in 2001, Goldman reportedly charged Greece $300 million to engage on "'blatant balance sheet cosmetics" to help the country join the European Monetary Union.

Goldman Sachs took advantage of a loophole that allowed countries to enter the EMU if they could demonstrate that they were lowering their debt and their budget deficit. To do this, Goldman Sachs sold Greece a "cross-currency swap" that gave the government cash up front in return for a big payment at the end of the loan period. The beauty of the arrangement was that since such currency swaps were permitted by the European Statistical Agency (Eurostat), the debt and deficit appeared to shrink.