EuroZone Profiteers: Who Owes Whom? 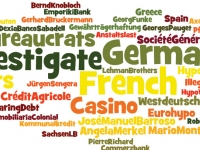 When Lehman Brothers, the New York investment bank, collapsed in September 2008, the global economy went into shock. The stock market plunged. U.S. and European banks froze lending to each other, afraid that they might be next. The New York Times called October the "wildest month in the history of Wall Street."[7] European leaders, sensing catastrophe, announced an unprecedented trillion-euro bailout to ensure that major banks in France, Germany, and the U.K. did not go under.

The impact of this crash on the smaller and poorer nations in Europe was not immediate, but unfolded in slow motion over the next few years. For example in May 2012 Bankia-Spain's fourth largest bank-asked the government for a â¬19 billion bailout,[8] while four Greek banks-Alpha Bank, Bank of Piraeus, Eurobank, and National Bank of Greece-needed a cash injection of â¬18 billion.[9]

As Greece's crisis raised fears of a default on its loans, European leaders feared a domino effect could engulf Ireland, Italy, Portugal and Spain, which in turn could threaten the stability of the euro as well as the entire post-World War II project to create a united Europe.

Politicians also suddenly realized that they had no mechanisms for debt pooling so that better-off member states could assist those hardest hit. So, the E.U. authorities and the International Monetary Fund (IMF) devised a variety of half-hearted back stop measures such as the European Financial Stability Fund and the European Stability Mechanism which made money available from major international lenders to make sure the payments on the loans to private banks would continue to be serviced. (As of June 2013, Greece has been promised â¬207 billion, Spain â¬100 billion, and Ireland an additional â¬85 billion.[10])


Under this scheme, the stockholders of private banks were protected together with mom-and-pop depositors in places like Belgium, France and Germany who had entrusted their savings to their national banks, only to have those banks gamble their depositors' savings on risky loans in places like Greece, Ireland and Spain.


Irish and Spanish debt burdens ballooned practically overnight as governments were forced to take on debt to save the collapsing private sector. Bond spreads on government loans -- which determine the cost for borrowing -- doubled to levels not seen since the 1990s.

Had these countries controlled their own currency, they would have been able to print money and risk inflation to pay off their debt. Instead, they all were tied to the euro and had little control over monetary policy. So even the Socialist government in Spain felt it had no choice but to win back the trust of the bonds markets, in order to be able to continue to have access to international financing.


In return for bailing out the indebted governments, the European Central Bank (ECB), the IMF as well as international lenders and the bond markets, put immense pressure on the borrrowing governments to cut domestic spending. Greece, Ireland and Spain (as well as Italy and Portugal) became locked into a vicious cycle of austerity.

All of these governments began laying off public employees, enacting salary cuts and freezes, a cost-of-living freeze for pensioners, higher retirement ages, increases in the value-added tax, and cuts in health care spending. Labor market reforms were passed, making it easier to hire and fire public employees. [11]

But instead of alleviating the financial crisis, the imposition of austerity measures reduced private consumption, aggregate demand and economic growth. The impacts have been disastrous: In Greece, for example, the number of children who arrived hungry at school skyrocketed. One student in ten has suffered from what public health professionals call "food insecurity," meaning they faced hunger or the risk of it, according to Prolepsis, a Greek public health non-profit. Prolepsis targeted 34 schools for food support where more than half of the 6400 families participating had experienced "medium to serious hunger."[12]


"All around me I hear kids saying: 'My parents don't have any money. We don't know what we are going to do,'" Evangelia Karakaxa, a high school student in Acharnes on the island of Crete told the New York Times in April 2013. "Our dreams are crushed," she adds. "They say that when you drown, your life flashes before your eyes. My sense is that in Greece, we are drowning on dry land."[13]


There is no doubt that wealthy Greeks (like wealthy people everywhere) were not paying their fair share of taxes-or any taxes at all in many cases-or that some ordinary citizens avoided their tax burden. (Greece has had one of the lowest rates of tax collection of any developed country).


But few have investigated the role of the big European banks in the economic crisis in Greece, Ireland, Italy, Portugal and Spain. These banks pushed politicians and private investors to accumulate some of this debt, since the financial sector profits not only from interest on loans but from exorbitant fees paid to broker contracts and deals.

These projects did provide a stimulus in the short term that benefited average people and the middle class to some extent. But when the house of cards collapsed, it was ordinary citizens like shopkeepers, small entrepreneurs, and school children who were stuck holding the bag.


Today the financial industry has resumed many of their high-flying ways - indeed some banks are even bigger than they were before the crisis - while ordinary citizens are being forced to pay the price of the poor stewardship by bankers and bureaucrats that contributed greatly to the EuroZone crisis.


So who was pushing billions of euros in cheap loans that are now so difficult to pay back?


Some of this money is now being paid back to the careless lenders with the help of E.U. institutions. Much of the bailout money is in fact coming from Germany. In other words, the German government is using taxpayer money to prevent its own banks from collapsing. Those banks, in turn, are holding the deposits of many of these very same taxpayers, meaning that average depositors are having to pay a premium just to maintain the security of their own savings.


"The euro-zone crisis is often framed as a bailout that rich, responsible countries like Germany have extended to poor, irresponsible countries like Greece," wrote Ezra Klein in the Washington Post.[18]Not so, says Peter BÃ¶finger, an economic advisor to the German government: The bailouts "are first and foremost not about the problem countries, but about our own banks, which hold high amounts of credit there," he told Der Spiegel.[19]

This conclusion is backed up by a study conducted by ATTAC Austria and published in July 2013. It showed that 77 percent of the â¬207 billion provided for the so-called "Greek bail-out" went to the financial sector and not to the people. "The goal of the political elites is not the rescue of the Greek population but the rescue of the financial sector," said Lisa Mittendrein of ATTAC in a press release. "They used hundreds of billions of public money to save banks and other financial players-and especially their owners-from the financial crisis they caused." [20]


The institutional lenders made it very clear that they were not forgiving most of the loans, though they did have to take some losses that amounted to 53.5 percent of Greece's debt to private lenders. But in a very real sense, the countries in crisis were receiving assistance simply to pay back their debts in order to convince markets that the Belgian, French and German banking sector would not collapse. The lack of confidence in the markets became apparent in 2008 when the euro plummeted against the dollar,[21] and as ratings agencies threatened to downgrade the lending countries' AAA rated bonds-causing borrowing costs to rise. (France was downgraded in January 2012.)[22]


In the next section, we look at a cross-section of the banks that made these loans, and examine why they suddenly poured money into Greece, Ireland, Italy, Portugal, and Spain. We'll start with three German banks from three different backgrounds, then look at two major French banks, and finally at a Belgian mega-bank.


From these six case studies, it will become clear that the European banking crisis was not just a series of unfortunate mistakes, but a result of the deliberate policies of politicians in Brussels, Paris, and Bonn who, in the late 1990s, went out of their way to encourage big banks in these countries to compete internationally.[23]

First, Germany and France-which had traditionally supported their banks' lending to local and regional businesses-withdrew state guarantees, and privatized their banking sectors.


Then, in 1997 the successful conclusion of the World Trade Organization's deal opened up trade in financial services,[24] and major European banks became aware that the big Anglo-American banks were snapping at their heels and that they needed to be more competitive.


These two crucial motivating factors coincided with the introduction of the euro in 1999-2002.[25] So these banks-all of which had solid credit ratings but little prospect of expanding at home-used their easy access to money to try to win new business by lending to the poorer countries at the periphery of the E.U. who suddenly were blessed with historically low interest rates and borrowing costs.


After struggling with high interest rates for decades as well as high unemployment, the poorest countries of the EuroZone jumped at the cheap and easy loans that came their way. But the sudden cash influx created an unsustainable economic bubble driven by speculative investment schemes in the borrowing countries.Today, they are paying dearly for that move and for the gamble by the bankers and politicians in search of quick profits.

[16] Simone Foxman, "20 Banks That Will Get Crushed If The PIIGS Go Bust," Business Insider, November 25, 2011. http://www.businessinsider.com/european-banks-praying-for-solution-euro-crisis-2011-11