A Jumbo with Engines on Fire and Nowhere to Land 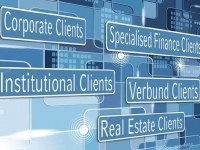 What: Westdeutsche Landesbank. This regional bank traces its roots back to 1832 and had total assets worth â¬294 billion at its peak in 2005.


Why: It speculated on complex financial transactions abroad in the U.K., Ireland, and other European nations after losing state guarantees. It lost â¬7.21 billion.


Outcome: It closed down June 30, 2012 and had its assets placed a new bank: Portigon Financial Services.

Robin Saunders, a U.S.-born banker, was the toast of the U.K. financial media at the dawn of the 21st century. Newspapers, from the conservative Daily Telegraph to the left-wing Guardian, marveled at her audacious Â£961 million (â¬1.2 billion) bid for the UK's Anglian Water Group.[44] They also reveled in gossip about the attractive blonde financier, fueled by extravagances such as her Â£400,000 (â¬500,000) birthday party in Florence for 180 friends, which included dinner at a historic palace (dress code "Italian medieval")[45] and her hobbies like hip-hop dance. She was nicknamed "Rockin Robin."[46]


Saunders was in charge of the Principal Finance Group and Asset Securitization division at WestLB, the biggest of the German landesbanken, which was partly owned by the state of North Rhine-Westphalia. Between her arrival in 1998 and her departure in 2003, the bank underwrote at least 30 transactions worth â¬22 billion.[47]


At first, getting the money was easy. With its state guarantees, WestLB was able to undercut other private banks like Deutsche Bank by a whole percentage point or more.[48] Saunders drew up complex transactions that allowed her to lend borrowers the capital she had raised in return for future income streams. Clients included Bernie Ecclestone's Formula One business, London's Wembley Stadium, and Whyte and Mackay, a well known Scottish whisky company.[49]

"She likes to dream up new ways of making the assets sweat, of using them as backing in return for an injection of capital," wrote an admiring reporter in the London Evening Standard. "[S]he reckoned, quite rightly, that at Goldman [Sachs] she could have sunk without trace. But at WestLB there was more chance of her star shining, and of being listened to."[50]


Such transactions were not unheard of at the giant German regional bank that had made loans to companies such as Enron and WorldCom in the 1990s and to countries including South Korea and Mexico. But when these deals went bad, the German government had always helped out.[51]


In 2002, WestLB was the first landesbank to be forced by the E.U. to give up its state guarantees.[52] But with no access to the retail banking market (controlled by the "sparkassen" or local savings banks), WestLB's access to quick and cheap money dried up.


The first head to roll was JÃ¼rgen Sengera, WestLB's chairman, followed by Saunders in late 2003.[55] But even after her departure, the bank continued to make risky investments. For example, in 2007, the bank lost â¬600 million on speculative schemes like betting on the price difference between two kinds of Volkswagen shares.[56] In 2008, the bank declared a â¬1.6 billion loss, mostly from subprime mortgage investments in the U.S.[57]


By 2010, one German banker described WestLB as a "jumbo with the engines on fire and nowhere to land." The bank had toxic debts worth an eye-popping â¬77 billion.[58]


On June 29, 2012, WestLB was closed down. "Its demise is a lesson in hubris to its peers," wrote a Bloomberg reporter. "The closure marks the end of a tumult that crossed collateralized debt, international real estate and U.S. subprime markets, and WestLB's attempt to conquer the investment banking industry."[59]