EuroZone Profiteers: Time to Investigate the Bankers and Bureaucrats 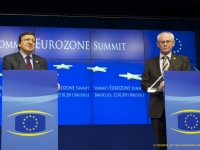 In her new book, A Dream Foreclosed: Black America and the Fight for a Place to Call Home, Laura Gottesdiener explains that 30 years ago, African Americans were unable to borrow money to buy houses because of a practice called redlining-where banks drew fictitious red lines around neighborhoods they would not lend to even if the borrowers had good credit and good jobs.[262]


Today, redlining is illegal, but the reverse has happened. In the 1990s, poor people around the U.S. were offered 100 percent loans to buy houses at low rates with virtually no collateral.


"The mortgage market for white Americans was flush. There was no more money to be made from issuing mortgages to white Americans. The banks needed new consumers," Gottesdiener told Corporate Crime Reporter magazine. "So, they moved into the minority market. But they weren't selling the conventional loans. They were selling these incredibly exploitative predatory loans."[263]

Gottesdiener says the banks weren't worried about repayments. "The banks, under the securitization process, could sell the loan off and receive the money pretty much immediately," she added.


She labels this "clear cut fraudster behavior" since the bankers knew that the housing prices couldn't go up forever. "They knew it was a house of cards."[264]


Eventually when enough of these loans could not be paid back, the house of cards collapsed, the poor were evicted, their borrowing costs skyrocketed, and the banks turned to the U.S. government to be rescued.


Likewise, French and Germanbankers were under pressure from the European Commission to compete to survive after the euro was launched in 1999. "For us, size is not a relevant aspect of our business," Heinz Hockmann, the CEO of Eurohypo said at the time. "It's profits."[265]


Michael Lewis, the financial journalist, expands on this idea: "The global financial system may exist to bring borrowers and lenders together, but it has become over the past few decades something else, too: a tool for maximizing the number of encounters between the strong and the weak, so that one might exploit the other," he wrote in Vanity Fair.[266]


Belgian, French, and German bankers were ready to take such bets since they believed the governments would back them up. "For the bankers it was always clear: The German government would never allow big German banks go broke, there was an implicit guarantee for them," Henrik Enderlein, a German economist at Berlin's Hertie School of Governance told the Irish Times. "It was as if you gave a gambler multimillion loans and sent him into a casino."[267]


Some German regulators say that they are now aware of the mistakes they made. "With the knowledge of today there are certain things one did then that we would not repeat," JÃ¶rg Asmussen, an ECB's executive board member told the same newspaper in March 2013. "I believe that, indeed, the wave of deregulation had gone too far and that is now being corrected after painful experience."[268]


But the European bankers and bureaucrats are actually feeling no pain. For many of them, life has returned to business as usual. The agony has been shifted to the politically powerless and the poorest of the poor in Greece, Ireland, and Spain.


Earlier this year two new theatrical productions opened on stage at the Deutsches Theater in Berlin and the Olympia Theatre in Dublin respectively: The Raspberry Reich and Anglo: The Musical.


In the German play, six actors portray 20 bankers who were interviewed by Andres Veiel, the director, about their role in the disaster. They put the blame on their government regulators who called them to a meeting in the late 1990s to tell them that they needed to expand and compete with London and New York.[269]


"We should ... get into more risk, expand the derivatives and structured finance products, finally get modern," one of the bankers says they were told. "We were read the riot act."


The Irish play uses giant puppets to tell the story of the boom times and the aftermath in Ireland. "The people ... are greatly under-borrowed," Rich, the fictional CEO of Anglo Irish, tells one of his junior bankers whom he urges to promote the "the bank that won't say no."


Jimmy, the junior banker, convinces his cousin, a drum maker, to borrow â¬890 million to build a 40-story apartment and shopping mall complex on his small remote island, while the chorus sings "Put a Zero on the End, He's a Friend."[270]


Eventually, the economy collapses and the actors portray a scene in which the Irish prime minister appears on stage hauled by German Chancellor Angela Merkel at the end of a leash. Confronted with the financial mess, Merkel is asked who will repay the banks. "Why, zeeze nice people, of course," she says in an exaggerated accent, pointing at the audience.


The time has come for the audience to go behind the scenes, to investigate the bankers who created the EuroZone crisis and hold them accountable. But the bankers are not the only ones. There must be repercussions for the E.U. bureaucrats and politicians who promoted the idea that free-market competition in financial services would benefit everyone. And not least of all, there should be a serious debate on how to reverse many of the policies that were used to create the European single market in financial services.


"The political elites accept tremendous unemployment, poverty, and misery-to save a financial sector beyond remedy. It is a scandal that the European Commission publishes hundreds of pages of reports but fails to specify where the money went to exactly," says Lisa Mittendrein of ATTAC Austria. "Banks 'too-big-to-fail' have to be split and return to serving public welfare instead of private profits. Creditors and the rich have to pay their share of the crisis's costs while the financial sector must be severely regulated."[271]