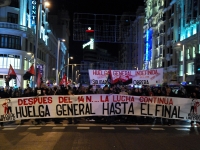 The three countries we have described-Greece, Ireland, and Spain-now face years of crippling debt to pay for the last decade's lending spree by Belgian, French, and German banks.


In April 2010, Greek bonds were downgraded to junk status. Interest rates in the markets skyrocketed, making it too expensive for the government to borrow money. Desperate, Greece asked the Troika for a bailout. The lenders agreed to provide â¬110 billion on condition that Greece impose "austerity": slash its public employees, social spending and privatize state assets.[249]


Austerity suggests that the Greek citizenry had been lazy and profligate. Yet a study by Patrick Artus, chief economist at the French bank Natixis, showed that the average Greek worker averages 2,119 hours a year compared to 1,390 hours for Germans, and 1,554 hours for the French.[250]

"There is ... a profound sense of bewilderment at a situation from which there appears no escape, and to which the only response is a call for more economic pain made by some of the same people who created the fiasco," wrote Jason Manolopoulus, a Greek hedge fund manager.[251]


Ireland was next in line with its hand out. In November 2010 the Troika bailed it out with â¬67.5 billion, which Ireland supplemented. It took â¬17.5 billion from its own reserves and pensions to finance the government deficit and to pay off the debts of three banks-Anglo Irish Bank, Allied Irish Bank, and Bank of Ireland.[252]

In October 2011, Greece negotiated a second bailout of â¬130 billion, this time for yet more austerity and privatization and an agreement to slash bondholder payouts. In February 2012 the bond owners agreed to a "haircut" of 53 percent of the value of their holdings.[254]


But not everyone did badly. Indeed, some savvy investors turned a profit by waiting until after the Greek haircut to buy Greek bonds when they hit rock bottom. They wagered correctly that the Greek government would want to redeem them at a higher value to salvage its financial reputation.


This past winter Dan Loeb of Third Point Capital made a quick $500 million selling bonds,[255] while Manolopoulos and his business partner Achilles Risvas from Dromeus Capital also turned a sizeable profit.[256]


Spain, too, has had to tap the "Troika" for money, asking for a â¬100 billion credit line in June 2012. It took out some â¬50 billion in December 2012 to buy up the real estate assets of its troubled banks, which it placed in a "bad bank" named Sociedad de GestiÃ³n de Activos procedentes de la ReestructuraciÃ³n Bancaria (Sareb).[257]


There was little choice for these three countries-at the height of the crisis, each country was hit with astronomical rates. In February 2012 the Greeks had to pay 36.5 percent to borrow money in the 10-year bond market; in July 2011 the Irish had to pay 13.8 percent; while in July 2012 the Spaniards had to pay over 7.3 percent. (The rates have since dropped. In mid-September 2013, 10-year bond yields were 10.3 percent for Greece, 4.2 percent for Spain, and 4 percent for Ireland).[258]


By contrast, the markets made money available to the German government at a rock-bottom rate interest rate of 1.17 percent and to the French at 1.66 percent in May 2013.[259] (The rates dropped after the ECB pledged to use all its power to keep them low in July 2012)

What's ironic is that until the crash of 2008, the finance ministries in most of the borrowing countries were relatively prudent compared to the finance ministries in the lending countries. For example, the Irish and Spanish governments had borrowed less than Belgium, France, Germany and the U.K. The Irish owed roughly 25 percent of gross domestic product (GDP) in 2007; the Spaniards owed 36 percent. Meanwhile the Belgians had borrowed 84 percent, the French and German government had taken out 65 percent. (Greece was a notable exception with well over 100 percent debt to GDP ratio).[260]

The BBC's Laurence Knight notes: "Madrid was in the process of paying its debts off-it earned more in tax revenues than its total spending. In contrast, Berlin regularly broke the maximum annual borrowing level laid down in the Maastricht Treaty of three percent of GDP." The same was true of France.[261] (In reality, these rules turned out to be irrelevant since they did not account for the real problems at play)

[251] Jason Manolopoulos, "You can Blame the Greeks- but They Have Been Betrayed by Their Leaders," Independent (UK), June 18, 2011. http://www.Independent (UK).co.uk/voices/commentators/jason-manolopoulos-you-can-blame-the-greeks-ndash-but-they-have-been-betrayed-by-their-leaders-2299318.html