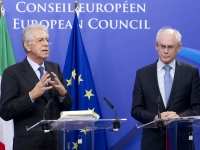 The move by Greece, Spain, and Ireland to become eager customers of the Belgian, French, and German banks occurred within a continent-wide context. After the launch of the euro in 1999, European bureaucrats were talking up the planned "European Single Market in Financial Services" by championing the idea of banks competing against each other across the continent, regardless of national origin. They were eager for the staid old European banks to compete with the behemoth U.S. investment banks. Ever since the 1997 World Trade Organization negotiations on financial services began opening up Europe's banking, insurance, securities and financial information markets, U.S. firms were increasingly encroaching on the Europeans' territory.[160]

In October 1997 E.U. Competition Commissioner Mario Monti gave a speech to the Institute for International Monetary Affairs. "Sometimes it is said that competition is not to the benefit of all: It can favor larger firms, but hurt smaller businesses. I do not share this view," Monti said. "Naturally, competition will reward greater efficiency. It will put pressure on less-performing companies and on sectors already suffering from structural problems. It may require a restructuring of certain firms and industries, also to be achieved via mergers and acquisitions. It leaves companies fitter, leaner, and more prepared to face competition domestically and abroad."[161]


Even as he spoke, Belgian, French, and German banks were planning to expand abroad. But French banks weren't expecting to make billions by competing in Germany, nor were German banks expecting to vanquish the French. Instead they were both heading south armed with cash they raised in their home countries at rates as low as 1 to 4 percent.

The reason to look abroad was simple: In the mid-1990s, national interest rates in Greece and Spain, for example, hovered around 14 percent, and at a similar level in Ireland during the 1992-1993 currency crisis.[162] So borrowers in these countries were eager to welcome the northern bankers with seemingly unlimited supplies of cheap cash. This rate differential allowed bankers to finance the most fanciful schemes, and politicians, as well as, to buy whatever they wanted.


"The tsunami of cheap credit that rolled across the planet between 2002 and 2007 ... wasn't just money, it was temptation," financial writer Michael Lewis wrote in Vanity Fair. "Entire countries were told, "The lights are out, you can do whatever you want to do, and no one will ever know."[163]


There was another important incentive-the northern banks knew full well that losing their government backing put them at the mercy of the markets. A centuries-old history made little difference to their investors, who would dump shares in a perfectly good bank if they saw greater profit elsewhere.


So the banks figured that to beat the competition, they had to expand as quickly as possible into new markets. Each bank-in its own way-took major gambles. From Greece to the U.S. they snapped up anything that smelled profitable: They bought everything from smaller banks to subprime mortgages while they doled out loans for unlikely projects including movie sets and new highways for public municipalities.

Monti's belief that the restructuring of the banks would not cause major problems failed to factor in the fundamental uniqueness of banks: Unlike companies selling shoes or sausages that can rise and fall with barely a ripple for the rest of the country, banks anchor the entire economy. So when a few (or more) big banks fail, they can create havoc for everyone else.


But the big European banks in countries like Belgium, France, and Germany were confident that their governments would support them if there was a major crisis - after all, that had always been true. Indeed, the credit rating agencies supported this theory, by giving the "too-big-to-fail" banks higher ratings. This allowed the banks to borrow at a cheaper rate, which effectively amounted to an indirect subsidy.


In the next section, we will look more closely at three countries that borrowed heavily from these banks: Greece, Spain, and Ireland.