Parochial and Overbanked, or Small Is Beautiful? 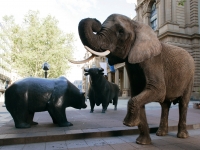 
Why: It tried to consolidate small banks, withdrew state guarantees to regional banks, and privatized Depfa, a major public bank. These banks looked for profits in the EuroZone after the creation of the Euro by borrowing cheap money in Germany to lend to countries with previously double digit rates. Real estate banks also made risky loans during construction boom.

How Much: $704 billion suddenly at risk in Greece, Ireland, Italy, Portugal and Spain.


Outcome: It bailed out several banks and closed down others. About â¬646 billion was provided to bailout German banks. State now owns about 45 percent of banks.[26]


Outside the Frankfurt stock exchange stand two bronze statues: a bull and a bear. In the summer of 2005, a real (and much larger) elephant named Tembo was brought to pose for photographs beside these two symbols of the rollercoaster nature of financial markets. The public relations stunt was conducted by Eurohypo-a division of Commerzbank-to mark the tenth anniversary of a new kind of bond-the jumbo-Pfandbrief worth at least â¬1 billion.[27]

The elephant was supposed to symbolize longevity, stability, and size-centuries-old hallmarks of German banking. But ironically, Eurohypo and Commerzbank would, unlike the stolid pachyderm, soon come to symbolize the massive size of the failure of the German banking system.

To understand this transition requires a little background into the somewhat unusual nature of German banking. While Anglo-American banking is dominated by many branches of a few major banks like Barclays or Citibank, Germany had 4,000 unique institutions in 1990 that comprised a three-pillar system of savings banks, co-operative banks, and private banks. The first two provide the bulk of the lending to the "mittelstand"(small- and medium-sized enterprises from households to niche family-owned companies), while the private banks serve major businesses. [28]

When the small savings banks needed more sophisticated services like hedging, they turned to 12 landesbanken (regional banks). These landesbanken enjoyed state guarantees (known as "anstaltslast" and "gewÃ¤hrtrÃ¤gerhaftung") that allowed them to borrow and lend at low rates.[29] Since they were publicly owned, they had no need to dabble in anything too risky, and could actually fulfill the elephant's stolid image.


Free-market thinkers had griped for years about the German system. Its three-pillar system of thousands of little banks, they argued, stifled competition and prevented non-German banks from competing for local customers in an open European market. Germany's bank lived modestly with a miniscule 1 percent profit, while Britain's four mega-banks, for example, boasted returns as high as 30 percent on equity.[30]


In 1999, the Economist magazine declared that "Europe" (meaning specifically Germany and France) was "overbanked," and used the Bavarian town of Erlangen as an example: "Between them the big banks ... have seven branches there. The local savings bank has 50 branches. Small wonder that Deutsche Bank, for example, has only 6 percent of German deposits. Contrast this with Lloyds TSB, which has a quarter of all current-account deposits in Britain." [31]


The Economist noted that some of the bigger banks such as Westdeutsche Landesbank (WestLB) and Commerzbank could become international players by diversifying into investment banking and other high-margin business in order to increase profits and expand.

Over the next decade, under pressure from E.U. bureaucrats including Mario Monti (the former competition commissioner who later became prime minister of Italy), the German government agreed to push some of these big banks to become more "market oriented." [32] The landesbanken lost their federal guarantees, and along with them, its high credit ratings and easy access to cheap funding. Pretty soon the landesbanken, together with the major private banks, started to merge and consolidate, while taking greater risks such as investing in speculative real estate projects around the world in the hope of turning enough of a profit to beat their competition.[33]

Fast forward a decade to April 2009. Instead of becoming more efficient and profitable, the German banking system had racked up an astronomical â¬816 billion in troubled assets from unwise investments-notably in countries including Greece, Ireland, and Spain.[34] Three years later, WestLB collapsed completely as did Eurohypo-the hard-charging real estate subsidiary of Commerzbank that had paraded the elephant through the streets of Frankfurt.[35]

By contrast, the 423 savings banks and 1,116 cooperative banks that did not speculate, survived and are still making small but decent profits.


"[German] lenders are parochial. That seemed antiquated once," wrote a chastened Economist in November 2012. "It now looks less stick-in-the-mud than it did. Two of the pillars [savings and cooperative banks] have come through the crisis with barely a scratch so far." [36]


Nor were the regional and private banks the only ones to take a major hit after the state forced them to compete in international markets.


Deutsche Pfandbriefbank (known as Depfa) was another massive casualty of this era of market competition. [37] It had been created as a public-sector mortgage bank to help the country rebuild after World War I-a time when few Germans had money to invest in private homes, and there was little tax income to finance major municipal projects.


From its origins in 1922 when it initially financed houses as well as multifamily residential units, to its heyday in the 1950s and 1960s when the bank began to finance government projects such as bridges and highways, Depfa's preferred status as a federal bank helped it raise money in capital markets.[38]


In 1992 Depfa was privatized to raise money for the state.[39] The bank started to look overseas for new business at just about the same time that Ireland was hoping to create an international financial center to attract new investment.[40]


A decade later, Depfa managers made a surprising and bold decision to move the headquarters to Dublin in 2002 to take advantage of tax breaks, and to escape German regulation that made it hard to make loans overseas to Japan or the United States.[41] Some 30 offices were opened around the world with the goal of transforming Depfa into a major global financier for indebted governments in Brazil, Hong Kong, India, Spain, and the U.S.[42]


In 2007, another private German bank bought out Depfa, but by 2009 the German government had to nationalize the merged entity to save it from complete collapse.[43]


In the next section, we'll see why the changes in German banking regulations caused three of these titans of traditional German banking-Commerzbank and WestLB, as well as Depfa-to suddenly self-destruct after decades of serving the public.