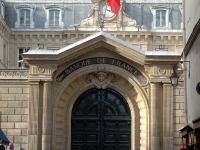 
Why: It privatized all banks that had been nationalized after World War II. Banks looked for profits in the EuroZone after the creation of the Euro by borrowing cheap money in France to lend to countries with previously double digit rates.


How Much: $477 billion at risk in Greece, Ireland, Italy, Portugal and Spain.


Outcome: It had to provide â¬370 billion in bail-out measures to major banks in 2008.

For almost four decades after the Second World War, French banking was a rather sleepy business as a result of two waves of nationalization: first by General Charles de Gaulle in 1945 and then by President Pierre Mauroy in 1982.[95] The main task of the big banks, the Socialist governments decided, was to collect savings, and help the government issue bonds. Just as in Germany, they enjoyed state protection, and were easily able to raise money for themselves.


Things began to change in 1987 when Prime Minister Jacques Chirac, himself the son of a banker, began a process of privatizing the banks. He later explained that he believed the industry needed to "shoulder its responsibilities to the business community."[96]


SociÃ©tÃ© GÃ©nÃ©rale, an established French institution founded in 1864, was one of the first to return to the private sector in 1987.[97] The following year saw the privatization of CrÃ©dit Agricole-majority owned by 39 state-organized regional cooperative banks that got its start providing loans to French farmers in the 19th century. It emerged as a powerhouse with 9,100 branches and 27 million customers, and started to look for opportunities.[98]

Other newly private French banks also started to merge and expand. BNP Paribas was created by combining several different kinds of banks: Banque de Paris et des Pays-Bas (an investment bank), Banque Nationale pour le Commerce et L'Industrie (a commercial bank), and Banque Nationale de Paris (a retail bank). Each emerged from nationalization in the Chirac years, and then eventually came together as one bank in May 2000.[99]


Today BNP Paribas, SociÃ©tÃ© GÃ©nÃ©rale, and CrÃ©dit Agricole are the three biggest banks in France (in that order).[100] In contrast to the dominant Anglo-American model (which required banks to separate retail and investment banking until fairly recently) they embrace "universal banking"-with retail, commercial, and investment banking under one roof.[101]

SociÃ©tÃ© GÃ©nÃ©rale started looking for acquisitions outside France in the late 1990s. Under CEO Daniel Bouton, it first bought banks in Bulgaria, Romania, Slovenia, and then, in 2004, it bought the General Bank of Greece.[102] That same year Baudouin Prot, CEO of BNP Paribas, announced that he had more than â¬5 billion to spend on takeovers in Europe and the U.S.[103] A year and a half later, Georges Pauget, newly appointed CEO of Credit Agricole, followed suit with a similar announcement, and quickly ploughed â¬9 billion in 2006 alone into buying up banks in Greece, Italy, Spain, and elsewhere.[104]


By the end of the decade, these investments had gone sour, and French banks were mired in bad debt. In October 2008, the government of Nicolas Sarkozy stepped in to ensure that the banks did not collapse completely and endanger the rest of France. It put up a â¬370 billion state guarantee to support the banking sector.


"We are in a changed era," explained Rene Ricol, the credit ombudsman who was put in charge of the bailout money. "Those who thought that less state was needed for more happiness got it wrong. We need the state."[105]

[98] Ibid. and CrÃ©dit Agricole, "No. 1 in France Among the Most Solid Banks in Europe," CrÃ©dit Agricole website, Date Accessed: September 1, 2013. http://www.eurofactor.de/en/eurofactor/credit_agricole_group/