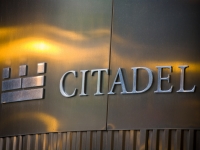 The U.S. government is investigating Citadel, a Chicago-based hedge firm and market maker that manages some $25 billion in client money, for allegedly giving smaller investors a bad deal. The Department of Justice wants to know if the firm is taking advantage of the complexity of high-speed trading.

Citadel is one of the oldest hedge funds in the business. It was founded in 1990 by Ken Griffin, who is the world's highest paid hedge fund manager. He made $1.7 billion last year and has a net worth of $7.5 billion, according to Forbes.

In addition to the hedge fund that Griffin runs, which is for very wealthy investors, the company owns a private trading platform that is so large that it does more business than the six smallest U.S. stock exchanges. Indeed many stock brokers use Citadel to buy and sell shares because they believe they can get a better deal than going through a traditional stock exchange since "market makers" like Citadel have access to faster data feeds.

There's another incentive too - Citadel paid the smaller brokers $52 million last year to get their business, The firm claims that that these clients saved $200 million by using Citadel's services.

But according to Reuters, which broke the news of the U.S. government investigation, Citadel allegedly used slower data feeds to buy and sell for these small investors despite the fact that the firm had access to more accurate prices. This matters because Citadel generates its profits from the difference between the price paid by a buyer and the price offered by a seller.

"The nature of the problem is that we know have a market where there are a handful of privileged participants who buy a privileged view of the market and they know prices before everyone else," Michael Lewis, a former bond trader and the author of books like Liar's Poker and Flash Boys, recently told TheStreet.com. "The intermediaries have an incentive to create problems for traders. The exchanges have the incentive to cater to the high frequency traders. Nobody really has an incentive to structure the market for the benefit of the economy and long term investors."

Reuters says that the government is pursuing Citadel under a 1989 law called the Financial Institutions Reform, Recovery and Enforcement Act (FIRREA) and has ordered the firm to turn over trading and pricing data.

"As one of the largest market-makers and providers of liquidity in the U.S., we regularly receive inquiries from and work closely with a number of regulators and others regarding our business and market practices," Katie Spring, a spokeswoman for Citadel, told the news agency. "We cooperate fully with such requests, but as a matter of practice, we simply don't confirm any particular inquiry."

Citadel is not alone in trading stocks outside public stock exchanges. For example a number of big banks run a system called "dark pools" that allow clients to place secret orders for institutional buyers who want to hide their identity or to ensure that a large order does not cause the price to fluctuate. There are 45 such registered dark pools which now constitute as much as 40 percent of overall stock market trading in the U.S., according to the Tabb Group, a market research firm.

These dark pool operators have also been accused of taking advantage of their clients. In February Barclays and Credit Suisse paid $154 million in fines for failing to provide them with sufficient information. Citadel also used to operate a "dark pool" named Apogee but shut it down over a year ago.