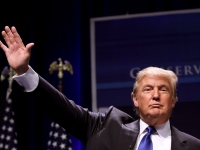 Billionaire businessmen and lobbyists are lining up to help Donald Trump after his victory in the U.S. presidential election. Trump appears to be welcoming them with open arms, despite his claim to bring change to Washington DC and get rid of special interests.

"It is time to drain the swamp," Trump announced in a press release last month. "This is why I'm proposing a package of ethics reforms to make our government honest once again." (The reference to Washington as a swamp is based on a popular myth that the city was built on a swamp, which critics say is an unfair exxageration.)

For example, the Trump transition team is widely rumored to be considering a number of billionaires and corporate CEO for his new cabinet. These include:

* Steve Mnuchin, a billionaire and former Goldman Sachs partner, is being considered for Secretary of the Treasury.

* Harold Hamm, another billionaire who founded Continental Resources, an Oklahoma oil company, is being considered for Secretary of the Interior  as is Forrest Lucas, another oil tycoon who founded Lucas Oil.

The people Trump has invited to work with him to put together this cabinet are none less than the very DC lobbyists who typically work at big Washington laws firms, whom he attacked last month.

For example Trump for America Inc. has been holding its regular planning meetings at the offices of Baker Hostetler, a major lobbyist, according to Politico, a news website.

The Intercept website has drawn up a list of some of the top lobbyists advising Donald Trump's transition team. They include Michael Catanzaro, a lobbyist for Koch Industries and the Walt Disney Company; Eric Ueland, who lobbied for Goldman Sachs; and William Palatucci, whose law firm lobbies for Aetna and Verizon.

And many other lobbyists are chomping at the bit. "Trump has pledged to change things in Washington - about draining the swamp," Trent Lott, a former Republican senator from Mississippi, told the New York Times. "He is going to need some people to help guide him through the swamp - how do you get in and how you get out? We are prepared to help do that." Lott works at Squire Patton Boggs, another DC law firm that does a lot of lobbying work.

Yet other lobbyists are looking down the road by drawing up "lists of outdated, ineffective regulations that can be reversed by executive order or, if necessary, legislation," Sam Geduldig of Clark Geduldig Cranford & Nielsen told the New York Times. "This is their opportunity to undo regulations that have been shackling them."

Topping the list of beneficiaries of Trump administration are `the mining, oil and gas companies such as Trump's top two donors were Murray Energy and Alliance Coal, both major coal companies.

Also knocking on Trump's door is TransCanada, the Canadian company which owns the Keystone pipeline that delivers crude oil from Alberta and hopes to expand it to refineries in Oklahoma. "We are evaluating ways to engage the new administration on the benefits, the jobs and the tax revenues this project brings to the table," TransCanada spokesman Mark Cooper told the Wall Street Journal.

Analysts say that the Trump's Washington is shaping up to be business as usual. "Welcome to Trump Swamp. Join us on the glass-bottom boat as we gaze on the denizens below. Keep your hands inside the railings - and please don't feed the [alli]gators," writes Richard Eskow for Alternet, a news website.

"The claim by any national figure that they are free of [special interest] associations is ludicrous," Rogan Kersh, a political science professor at Wake Forest University in North Carolina told NJ.com days before the election. "From bankers and developers to military contractors and energy companies, Trump has donors and close personal ties that will be viewed as influencing White House decisions, much as he complains Secretary Clinton does."