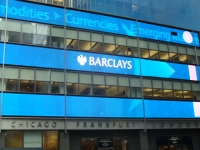 Did a few individual traders in London conspire to rig global interest rates in order to enrich themselves or were they just pawns in an ongoing conspiracy by major banks designed to routinely skim billions from the international financial system?

This is the question that judges at the Southwark Crown Court in London have been asked to answer for the third time in the last 12 months, under charges brought by the UK Serious Fraud Office.

"Making money was the name of the game. These men were paid well. They got substantial bonuses at the end of the year," said James Hines, a prosecutor for the government. "It's not trading on a level playing field and it's dishonest."

The scandal, which has unfolded over the last eight years, has shone a light into how banks set - and manipulate - global interest rates for $360 trillion in international deposits that are lent out every day. While most of these loans are overnight transfers between banks, they affect the price of consumer loans like mortgages, car loans and credit card loans.

Every day the British Bankers Association (BBA) calls up key bankers to ask them what rates they are offering. Based on these numbers, the BBA sets a global benchmark known as the London interbank offer rate (LIBOR), on which some 150 other international rates are based. But since these numbers are simply educated guesses by a few people who often know each other, they are easy to fix.

In recent years dozens of banks have paid up over $9 billion in fines for rigging but very few individuals have gone to jail.

The first UK banker to be put on trial was Tom Hayes, a former trader for Citigroup and UBS, who was sentenced to 14 years in jail last August. The second trial of six traders accused of helping Hayes fell apart this January resulting in a black eye for the regulators.

The men exchanged messages that suggested that they were aware that the system could be manipulated. Hines quoted one trader who said: "our deal has a big position, very much in favour of a crazy high Libor setting". A second said: "tomorrow's fix to be 4.07 minimum. 4.07, nothing less", while a third trader said: "We just need to f###### smash it. Have him set it low".

"Remember when I retire and write a book about this business your name will be written in golden letters," Contogoulas joked in an email to Johnson. "And you'll have an open invitation to my bar in the Greek islands he he."

Johnson replied: "I would prefer this not to be in any books!"

Lawyers for the five men said that they were just doing the job they were paid to do.

"Barclays did nothing to educate the traders about what could be allowed in the submitting process," Hugh Davies, lawyer for Merchant, told the court. "At no point did compliance raise any issue about this."

The trial is expected to last till the end of June.

Barclays has already paid out a record $450 million to settle the charges of fixing rates. The scandal also forced Bob Diamond, the Barclays CEO, to resign.