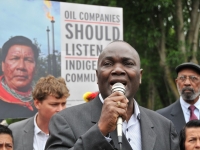 Some 500 Angolan fisherfolk have demanded compensation from Chevron after an oil spill polluted the Mandarin and Mpuela shoreline in Cabinda last month, close to the California company's drilling operations. Under government orders, all fishing activity was banned for almost two weeks.

"Unfortunately, we were deprived of our working tools like the nets, fishing lines, signaling buoys and other articles which are the main source of income and livelihood of our families," JoÃ£o Ntendequele, chairman of AssociaÃ§Ã£o Voz do Pescador de Cacongo (the local fishermen association), told Jornal de Angola.

The affected villagers have asked Chevron to pay $2,000 per person for each day that they were unable to work.

Company and government officials have issued contradictory statements about the spill. "Samples were collected and analyzed, and it has been determined that the source of the crude was not from (Chevron) operations," Chevron told AllAfrica in a press statement in late September, noting that it was cleaning up the contamination as a gesture of goodwill.

The Cabinda Gulf Oil Company (CABGOC) - a wholly owned subsidiary of Chevron - has been drilling for oil in Angola for over 50 years. Locals say the exploration has long had a huge impact on fishing, which most of them depend on for their livelihoods. "Where you have oil exploration, you don't have fish because they stay around the platforms and we are not allowed to go there for security reasons, so we must travel elsewhere for our catches," JoÃ£o Mavinga Tomas, told South Africa's Mail and Guardian newspaper in 2012.

"I remember 25 years ago when this sand used to be whiter than you could imagine and the water was crystal clear, but not any more," JosÃ© Simba, a local motor mechanic, added. "You do get quite a few spills and it drifts on to shore. It has reduced the number of fish. There are definitely not as many as there used to be."

Santos Virgilio, an adviser to the environment ministry, told the South African newspaper that Chevron had occasionally been fined for spills in the past but could not provide details on the number of spills or the extent of damage. The company also declined to provide any details to the newspaper.

Oil has historically provided 90 percent of the Angolan government budget and much of that revenue has come from Chevron's Cabinda operations. Yet poverty is endemic in Angola where most people live on less than two dollars a day with no access to electricity and running water. At the same time, the national capital of Luanda has been officially listed as the world's most expensive city for expatriates where a bottle of Coke can sell for $10 and a ten mile taxi ride can cost $450.

Most observers blame President JosÃ© Eduardo dos Santos who has allegedly personally benefited hugely from the oil revenue over his 40 year tenure. "Angola is widely regarded as one of the world's most egregious kleptocracies," wrote Michael Spector in the New Yorker recently.

Unlike the local people, Chevron employees enjoy all the comforts of home inside the company compounds where they live when they jet in and out on month long rotations. "Here there are paved roads smooth enough to Rollerblade on. Folger's coffee seems to be percolating in every office," a New York Times reporter wrote in 1998. "You can have hot dogs and chocolate chip cookies for lunch. Or play golf on the 18-hole par-3 course."