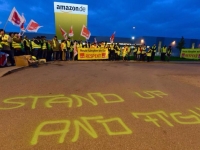 Some 2,000 German employees of Amazon, the internet retail giant, walked off their jobs this week at four sites - Bad Hersfeld, Graben, Leipzig and Rheinberg. The strike action was coordinated by Vereinte Dienstleistungsgewerkschaft (United Services Union), a Berlin trade union commonly known as Ver.di.

The company's German business is booming - last year it made $10.5 billion in sales. This month, the company opened two new warehouses in Poznan and Wroclaw in neighboring Poland to handle orders and a third site (also in Wroclaw) is expected to open next month. By Christmas, the company had hoped to open another two more warehouses in Brno and Prague in the Czech Republic to handle German demand, although the former site was scrapped in April after a dispute with the Brno city council.

"Ver.di is calling for wages on the basis of a retail tariff. But Amazon's fulfilment centres are not shops frequented by customers," Amazon said in an official statement. "Staff in our fulfilment centres work within the logistics sector, not retail."

"Our people stow, pick and pack," a spokesperson for Amazon Germany told the Financial Times. "It is not like Harrods where you have customers in front of you and need a special level of education to do that. Many [workers] had no proper education. Some have not even properly finished school."

Ver.di says that Amazon should pay its workers in line with similar businesses in Germany. "The work at the fulfilment centre at Amazon is a classical part of the mail-order trade and therefore a classical part of the retail trade," a Ver.di spokesperson told the BBC. "Amazon wants to dictate unilaterally the working conditions, but the employees are not willing to accept that anymore."

On Sunday night at 10pm, the workers walked out of their jobs. They were expected to resume work Tuesday night, after the show of force but more strikes are expected later this year. "We're getting ready for a hot autumn," said Bernhard Schiederig, a Ver.di negotiator, told the Wall Street Journal. "Amazon management would be well advised to stop rejecting our demands."

Amazon has previously been faulted for its working conditions in Germany, notably in a February 2013  investigative documentary made by ARD television which uncovered abuses at a worker dormitory in Bad Hersfeld. The facility housed temporary laborers who were bused in from Hungary, Romania and Spain by Trenkwalder, an Austrian subcontractor.

ARD also filmed the security guards at the dormitories who wore black boots and uniforms associated with neo-Nazis. The workers complained that the guards, who were employed by Hensel European Security Services, intimidated workers regularly. (The security company was fired after the film aired)

Nor is Germany the only country in which Amazon been criticized for working conditions. In the United Kingdom, a Financial Times investigation found that workers at the Rugeley warehouse walked between seven and 15 miles a day and were monitored for efficiency by personal satellite navigation devices.

And in the United States, Amazon has come under fire for abusive conditions at its Allentown, Pennsylvania,warehouse. On June 2, 2011, the U.S. Occupational Safety and Health Administration received reports that 15 workers had collapsed from heat related injuries.