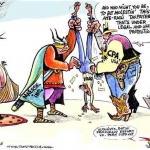 IRAQ: American Faces Charge of Graft for Work in Iraq

Published by
New York Times
| By
James Glanz
|
In what is expected to be the first of a series of criminal charges against officials and contractors overseeing the rebuilding of Iraq, an American has been charged with paying hundreds of thousands of dollars in bribes and kickbacks to American occupation authorities and their spouses to obtain construction contracts, according to a complaint unsealed late yesterday. Read More
Image 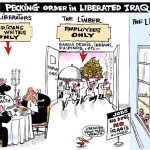 Industry: Construction & Megaprojects, Energy, Mining & Utilities, Military, Security & Surveillance
Published by
Special to CorpWatch
| By
David Phinney
|
Thousands of low-wage Asian laborers are traveling to Iraq to work for U.S. military contractors like First Kuwaiti and Prime Projects International in the hope of sending money home to their families. Trapped and exploited under inhuman conditions, many of them are now fleeing the country to save their lives. Read More