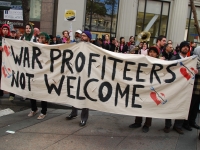 These companies have weapons for sale in the war. BAE offers howitzers like the M-777, which can fire 155-mm shells at targets 30 kilometers away. Lockheed Martin and Raytheon make infra-red guided Javelin missiles that have a range of 4 kilometers that are used to penetrate armored vehicles. Raytheon also makes Stinger missiles. Rheinmetall has offered to provide 50 old Leopard 1 tanks to Ukraine as well as 35 Marder infantry fighting vehicles. Meanwhile, Northrop Grumman’s RQ-4 Global Hawk has been making regular surveillance flights over the Ukrainian border. (A full list of arms transfers to Ukraine can be seen here.)

“They profit from war, and they push for war, and they even hope to profit more from bloodshed, from destruction, and somehow do not escalate for the scale of nuclear war,” Yurii Sheliazhenko, the executive secretary of the Ukrainian Pacifist Movement, told Democracy Now in late March.

Indeed the CEOs of military contractors have been quite public about how profitable they expect the war to be.

“Security – as shown by the current conflict – is the bedrock of our life in peace and freedom. Rheinmetall has a special obligation here,” Armin Papperger, Rheinmetall CEO, told investors back in March.

In fact, fully one month before the invasion, Gregory Hayes, CEO of Raytheon, told investors: “I fully expect we’re going to see some benefit from it.” He remain defiant about his comment when questioned by a reporter from the Harvard Business Review. “We don’t apologize for making these systems, making these weapons. The fact is, they are incredibly effective in deterring and dealing with the threat that the Ukrainians are seeing today,” he said.

“The Biden Administration is working around the clock to fulfill Ukraine’s priority security assistance requests, drawing down weapons from U.S. stocks when they are available, purchasing directly from industry for rapid delivery to Ukraine, and facilitating the transfer of weapons from allies and partners when their systems better suit Ukraine’s needs,” said Eric Pahon, a Pentagon spokesman.

President Biden has also been very candid about the role he expects of the weapons makers. “You’re making it possible for the Ukrainian people to defend themselves, without us having to risk getting into a third world war by sending in American soldiers fighting Russian soldiers,” Biden told workers at Javelin missile factory operated by Lockheed in Alabama earlier this month.

Meanwhile, the war in Ukraine is also expected to increase overall demand for weapons systems especially as Finland and Sweden have applied to become members of the North Atlantic Treaty Organization (NATO) after decades of staying neutral. Not least Germany, which demilitarized in 1945 after the two World Wars, recently announced plans to increase military spending immediately by more than $100 billion.

Weapons companies were already receiving a massive amount of money from the U.S. government – some $768 billion in 2021 – before the war in Ukraine began. In the last week, the U.S. Congress approved a $40 billion spending package for the Ukraine war with a big chunk going to arms companies.

In order to keep the money flowing, these weapons makers spent $2.5 billion on lobbying over the last 20 years, according to numbers gathered by Brown University’s Costs of War Project. Indeed, the number of military lobbyists over the past five years has outnumbered the number of members of the U.S. Congress.

The same is true in the UK where BAE Systems has been the largest lobbyist in the UK during the past ten years, according to Transparency International. Indeed, BAE has held 30 meetings with government ministers in just the past two years.

For these companies, the war in Ukraine came at just the right time, say analysts. “In August when the Afghanistan war ended, when you had some of the CEOs of defense contractors lamenting the fact that the war ended and they were expecting a hit to their bottom line,” Dan Grazier, a senior defense policy fellow at the Project on Government Oversight in Washington DC, told Vice. “When the [Ukraine war] started, there were people there almost eagerly anticipating it—you know, big, big profits.”

Others noted that the weapons companies have little interest in diplomatic solutions to put an end to the conflict. “There's not very much money to be made in diplomacy, usually,” Erik Sperling, executive director of the anti-war group Just Foreign Policy, told Xinhua news service.

Since the war began, stock market speculators have rewarded shareholders of these companies. At the time of writing, the shares of BAE Systems, the largest weapons manufacturer in Europe and the UK, had risen by 21 percent since the start of the invasion; Rheinmetall has seen its stock price surge 88 percent over the last three months. In the U.S., Northrop Grumman’s stocks are up by around 16 percent, while shares of Lockheed Martin, the world's biggest weapons manufacturer, and shares of Raytheon Technologies increased by 28 and 20 percent respectively in the first month of the invasion.

“The situation is delightful for Rheinmetall, they probably never even dreamed of something like this €100 billion fund,” Alexander Lurz, a disarmament expert at Greenpeace Germany, told the Irish Times. “Now they just have to wait for the orders to arrive.”

Meanwhile Ukrainian peace activists have been speaking out against the war, stating that they want Western governments to understand that escalating weapons supplies has devastating consequences.

“I feel that my country now is like a battlefield for all countries’ ambition: NATO parts and Russia parts. And two imperialistic countries want to divide my country,” Nina Potarska, coordinator for the Women’s International League for Peace and Freedom in Ukraine, told Democracy Now. “I just want to stress one very simple idea, that this is not movie. We are real people, and we die like real people. And real children cry because of the explosions everywhere. It’s not matter in Ukraine or in Afghanistan or in Syria: We all alive people, and we want to be in peace.”

And across the world, activists are taking this message to corporate headquarters.

For example, Lockheed Martin was the target of protests in early March by the British group Block Lockheed, which blocked traffic from entering the company's technology plant in the town of Ampthill in the UK. A spokesperson for the protesters said, "We are trying to draw people's attention to the fact that war profiteers aren't interested in peace... They make a lot of money out of constant war."

In late March, five demonstrators were arrested for protesting on the roof of Raytheon Technologies' building in Cambridge, Massachusetts. Protestors, including the FANG Collective and Resist and Abolish the Military Industrial Complex (RAM INC), held banners that read: “Raytheon profits from death in Palestine, Yemen, & Ukraine” and “End all wars, end all empires.”

In late April, peace activists across the globe - from Seoul to Sicily to Montréal - protested and brought petitions and banners to Lockheed Martin offices, demanding the company begin working on conversion to peaceful industries.

On May 10 a number of peace organizations in Germany held a protest at the headquarters of Rheinmetall in Düsseldorf, the largest weapons maker in Germany. “Capital feels well in times of war. We already know that from the past,” an activist from the Disarming Rheinmetall group told Die Tageszeitung.

And on May 17, a University of California coalition called UC Divest protested outside the university Board of Regents meeting to demand the university divest from weapons manufacturers, chanting: “Hey hey, ho ho, corporate greed has got to go,” and “UC, UC, you can’t hide, we can see your greedy side.” (The University of California has $2 billion invested in BlackRock which in turn holds a 6 percent ownership in Lockheed Martin.)