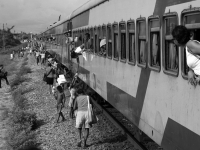 Mayors of dozens of communities along the route of a 556 mile railway from the Carajás iron ore mine to São Marcos bay, are up in arms against a major new expansion of industrial activities by Vale, a Brazilian mining giant, because of the adverse impacts on their lives.

"This is not the development we want. We have more money in our pockets but no water to drink, the rivers are polluted," George Pereira, secretary of the Itaqui-Bacanga Community Association, a municipality in closest proximity to the port told Inter Press Service. "Vale does good work, but in isolation, without transformative programs to develop the entire area."

Itaqui-Bacanga is a member of a consortium of 23 municipalities in Maranhão - the poorest state in Brazil - that are affected by the railway and the industrial expansion of Vale's Ponta da Madeira maritime terminal in São Marcos bay. Others affected include Açailândia, Bom Jesus Das Selvas, Miranda Do Norte and Santa Rita.

Vale's influence in transforming the Maranhão region has been significant since the discovery of massive iron ore deposits in the Carajás Mountains in northern Brazil in 1967. As a state-owned company at the time, Vale was given a thirty-year concession - until its privatization in 1997 - to operate the newly founded mine and build necessary infrastructure to ensure efficient iron ore and other crop exports from Ponta da Madeira.

Today Carajás Mine - the world's largest iron ore producer - exports approximately 110 million tons of iron ore every day. This massive export of iron ore is possible due to the 556 mile-railway linking the mine to Ponta da Madeira port.

Even though the "local economy is booming" Maranhão continues to have the second-lowest ranking in the Human Development index among Brazil's 27 states according to Brazilian Institute of Geography and Statistics.

Take Boqueirao, a small fishing village on the banks of the Ponta da Madeira port, which was destroyed for the port expansion. "We are victims of progress," said Omar Santos Coelho, one of the 80-100 fishermen who have now begun to resettle in an uninhabited beach area next to the port.

Or Piquiá de Baixo in Açailândia municipality which has become "an emblematic case" representing the dangerous consequences of Vale-led development in Maranhão, according to Justiça nos Trilhos.   A total of 14 steel mills and 70 charcoal ovens operate in nearby rural communities.

This has resulted in poor air quality and unsafe drinking water for more than 380 families of the town. A study by the Reference Center for Infectious and Parasitic Diseases at the Federal University of Maranhão concluded that 40 percent of the residents experience respiratory illnesses, lung disease and skin infections.

In May 2013, the mayors wrote a joint Open Letter to the People of the World stating that the Vale-operated railway would affect over 6,500 families and cause "inevitable damage to the environment, to society in general, and in particular, to the citizens who live in the communities covered by the railroad."

"There are shakes and cracks causing damage to homes, removing families or appropriation of a portion of their lots by Vale; noise pollution damage caused to local roads by large vehicles, the compulsory removal of families; interdiction conducting gardens near the railroad, the arrival of a large number of male workers putting at risk adolescents in situations of social vulnerability," says the letter.

One year prior, the International Movement of People Affected by Vale, a coalition of 80 organizations, released The Vale 2012 Unsustainability Report to highlight the impact of Vale's policies in communities around the world.

"The company ignores serious health and housing problems and the lack of water and access to land resulting from its operations; disrespects traditional ways of living in community and harmonious coexistence with the environment; and ignores decent, safe and respectful working conditions," says the report.

The Vale Unsustainability Report states that 401 accidents happened on the railway in 2010 killing 11 and injuring 175. In addition, Vale produced 726 million tons of steel waste and emitted 519,600 tons of pollutants.

In response to the allegations stated in The Vale 2012 Unsustainability Report the company released a statement saying they "respectfully receive all suggestions and complains referring to its operations. We are aware that mining activity has an impact, and therefore we work in association with communities and government to find solutions that guarantee people's safety, as well as harmonious and healthy coexistence."

This is not the first time Vale has been criticized for unsustainable development. In 2009 the company was fined 56 notifications of environmental "infractions" by the Brazilian Institute for the Environment and forced to pay $37 million Real's (approximately $116 million). Vale also received the "Nobel Prize of Shame" in 2012 as the worst environmentally-friendly corporation in the world.