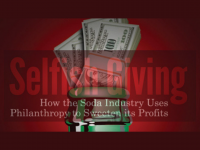 The campaign was led by grassroots groups like Dietitians for Professional Integrity and Physicians Against Unhealthy Corporate Influence after the company started to actively promote such sponsorships in 2009.

The first major protest was led by Dr William Walker, the director of the Contra Costa Department of Health Services in California, who publicly resigned from the American Academy of Family Physicians together with 20 of his colleagures in October 2009. "I ask the American Academy of Family Physicians to end this unhealthy partnership and to join us in leading this important campaign to take back the health of our residents and end the obesity epidemic," he said.

Over time other doctors followed suit in speaking out as the company's influence become more and more obvious. In 2011 Dr. Michael Siegel, a professor in the Department of Community Health Sciences at the Boston University School of Public Health, wrote a blog post noting that Coca-Cola appeared to have had remarkable success in getting the medical associations to moderate public statements to avoid offending their sponsor.

Siegel singled out a web statement (original version available here) in which the American Academy of Family Physicians stated: "Sugar-sweetened drinks, such as fruit juice, fruit drinks, regular soft drinks, sports drinks, energy drinks, sweetened or flavored milk and sweetened iced tea can add lots of sugar and calories to your diet. But staying hydrated is important for good health."

"This sounds like a statement coming right out of the mouth of Coca-Cola itself. The company repeatedly refers to its sugar-laden soft drinks as a way of meeting your 'hydration needs,' Siegel wrote. "To get the nation's body of family physicians to caution people against limiting their soda intake is more than money could ever be expected to buy."

In 2013, the Center for Science in the Public Interest published a report titled: "Selfish Giving: How the Soda Industry Uses Philanthropy to Sweeten its Profits." "The industry playbook is clear-make philanthropic donations to divide and conquer the very constituencies these policies would ultimately benefit," said Dr. Anthony Iton, senior vice president of the California Endowment, a private health-oriented foundation that funded the report, in a press statement. "Big Soda has learned well from Big Tobacco. But as more Americans start to see through their cynical tactics, public opinion will shift to protect children, not profits."

The backlash from members of the medical associations picked up steam last year. Dr. Arnold Matlin, a retired pediatrician from Rochester took up the issue with the New York chapter of the American Academy of Pediatrics. "You may be surprised to learn that AAP has accepted sponsorship from Coca-Cola Corporation for the HealthyChildren website," Matlin wrote on the Physicians Against Unhealthy Corporate Influence Facebook page last February.

"I have introduced a resolution (#108) to terminate this sponsorship. I hope you'll take the time to give a positive response to my resolution, and say a few words about why our Academy shouldn't allow a major manufacturer of sugar-sweetened beverages to sponsor the HealthyChildren.org website." Matlin won his petition and then took the fight to the AAP's Annual Leadership Forum this past March.

Others took the fight to the American Academy of Family Physicians annual meeting in Washington DC last October. "We never want money and power to have a louder voice than science, and we reject sponsorship from corporations who profit from making our patients sick," wrote Dr. Richard Bruno and Kevin Burns of the Johns Hopkins Bloomberg School of Public Health, who belong to Physicians Against Unhealthy Corporate Influence, on the website of the Union of Concerned Scientists.

In the last few months each of the three medical associations quietly ended their collaboration with Coca Cola.

The company also issued an equally carefully worded statement that continued to push their product. "Pediatricians are absolutely right to be stressing healthy eating and drinking to parents and kids," Sandy Douglas, the president of Coca-Cola North America, told the New York Times,  "But I suspect that completely eliminating them is not necessary for kids to be healthy any more than eliminating ice cream, birthday cakes or cookies. The key is moderation."