U.S. Courts to Try Contractors for Torture at Abu Ghraib 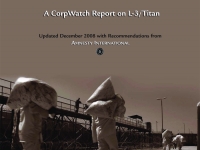 Two U.S. companies can be prosecuted for the alleged role of their employees in torture at the Abu Ghraib prison in Iraq, a U.S. federal court ruled last week. The companies are CACI of Arlington, Virginia, which provided the interrogators at the prison, and L-3/Titan of New York city, which provided translators at the same location.

Shimari says he was subjected to electric shocks, deprived of food, threatened by dogs, and kept naked while forced to engage in physical activities to the point of exhaustion. Rashid says he was placed in stress positions for extended periods of time, deprived of oxygen, food, and water, shot in the head with a Taser gun, and beaten so severely that he suffered from broken limbs and vision loss.

The other 72 Iraqis who sued L-3/Titan alleged that they were subjected to "electric shocks, rape and other forms of sexual assault, forced nudity, broken bones, and deprivation of oxygen, food and water" by the contractors during their detention.

CACI and L-3 say that since they were working for the federal government during combat, they cannot be judged by a court because of "absolute official immunity" and "sovereign immunity" respectively.

The court dismissed this argument. "(T)here is no indication ... that the Supreme Court intended to construe the law-of-war defense as an immunity from suit, rather than merely an insulation from liability," wrote Judge Robert Bruce King of the Court of Appeals for the Fourth Circuit in his opinion issued on May 11, 2012. Ten other judges supported him and three disagreed.

"Today's ruling provides an opportunity for victims of torture at Abu Ghraib to tell their stories to an American court and to obtain justice from the private military contractors who played such a prominent role in one of the most shocking episodes of abuse in recent American history," said Baher Azmy of the Center for Constitutional Rights, who co-argued the case for the plaintiffs.

"The ruling is especially important in light of the unprecedented rise in the use of private military contractors in war zones," says Susan Burke, lead counsel on the case. "Ultimately, these cases should be about whether the actions of the defendants constituted war crimes and torture in violation of the law and not about whether or not the perpetrators should receive impunity even if they engaged in torture."

The New York Times agrees. "Hawks may spin the Fourth Circuit's decision as a victory for bleeding heart liberals," writes Andrew Rosenthal, the newspaper's editorial page editor. "But really this is about preserving the most traditional legal principle there is: that criminals should answer for their crimes."

L-3/Titan's work in Iraq has been the subject of a lengthy investigation by CorpWatch "Outsourcing Intelligence in Iraq." Amnesty International provided a set of recommendations on how the federal government should address the role of contract interrogators and translators in the field.