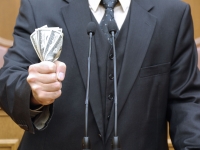 Proposals for such a law have been making the rounds for over a month.

“Temporary, targeted and timely liability relief is critical as employers work to keep their employees and customers safe and reopen their doors as America moves towards recovering from this crisis,” Neil Bradley, chief policy officer of the U.S. Chamber of Commerce, said in a recent press release. “Without temporary liability protections many companies face a daunting choice of either staying closed and risking bankruptcy or reopening and risking a business-crippling lawsuit.”

His views were echoed by the National Federation of Independent Business. “It’s imperative that we establish protections from the threat of lawsuits that exploit the already damaging effects of COVID-19,” said Karen Harned, the executive director of the NFIB’s Small Business Legal Center, in a press release.

The National Association of Manufacturers also echoed this idea in a similar proposal.

"And the American Legislative Exchange Council (ALEC) – a group of conservative U.S. state lawmakers who lobby for deregulation, with financial support from the billionaire Koch Brothers - has been pushing for less corporate liabilities for years. This pandemic has been no exception. “There needs to be a measured approach, and there needs to be protection from certain liability,” Ronnie Lampard, head of the ALEC’s civil justice task force, told Bloomberg Law. “We want to say if the organizations and employers are complying with certain rules and regulations, those companies should be immune from certain liability.”

Some politicians expressed cautious support. “On the Republican side, I think there would be broad support, probably near-unanimous support,” Mike Johnson, a Republican member of Congress from Louisiana who is a member of Trump’s congressional task force on the economy, told Reuters news agency.

But consumer groups are vocally opposed. Over 100 groups signed and released a joint letter on May 6th condemning these proposals.

Instead, the letter advocates for “good public policy, a commitment to worker and public health and safety, respect for the States and our federalist system, and common sense—all counsel against immunizing companies from liability when their own conduct causes harm.”

In their letter opposing immunity, the consumer groups highlighted a few examples of the kinds of companies that should not be exempted from liability such as nursing homes that failed to take precautions recommended by state health departments; companies that encouraged employees to come to work after an outbreak.

"This is one of the most appalling things I've heard in the context of this crisis,” Debbie Berkowitz, director of the worker safety and health program at the National Employment Law Project told the Washington Post newspaper. “The idea companies can be held accountable is absolutely crucial to protecting workers.”

“The whole point of making employers liable for risking the lives of their staff is to prevent them from exposing their staff to undue risk," wrote Justin Wolfers, an economics professor at the University of Michigan, on Twitter. "Businesses are asking for the right to expose their workers to fatal risks with no consequences. It's bad economics and bad policy.

A survey conducted last month by Hart Research, a public opinion research firm, shows that ideas of corporate immunity are not very popular with the general public either. Almost two-thirds of the participants opposed giving “guaranteed immunity to companies from lawsuits in cases involving coronavirus infection” with 71 percent of Democratic party voters, 56 percent of Republicans and 73 percent of non party affiliated voters, stating that they did not agree.

“We were shocked because the public wants more than anything to feel safe, and if no one is accountable no one is safe,” said Linda Lipsen, CEO of the American Association for Justice, which commissioned the survey. “But we’re not surprised because the majority leader [Congressman Mitch McConnell] has been trying to immunize corporate conduct for 34 years.”

Meanwhile President Trump is doing his best to support such immunity. On May 19th, he issued an executive order calling on U.S. federal agencies to suspend or permanently rollback regulations, on the grounds that such action was necessary to jump-start the economy.